For minor things that don't fit on other pages. 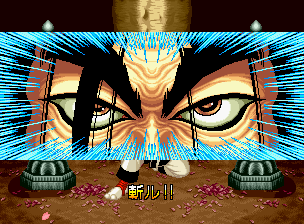 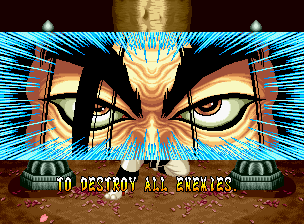 Both of these run into a really basic translation problem: Japanese is a subject-object-verb language, while English is subject-verb-object. That means that in Japanese, the close-up on Haohmaru comes with a dramatic "KILL!" that just doesn't translate well at all.

Besides that, the official translation is...odd, but doesn't seem to bear the marks of the editor. It feels a lot more like a quick translation from a non-native English speaker.

The Japanese is a lot more violent than the English. That feels rare. But the Japanese talks about shura (See: Sokaku over in Fatal Fury 3) becoming a "bloodstained/man-eating fiend", and explicitly killing all enemies. The English is toned down - samurai struggle to triumph over evil, not follow the path of bloodshed.

It's not entirely clear who's talking in this - I went with a first-person viewpoint to match what I was trying to do at the end, but the official translation is an omniscient narrator. Could be either, really. Japanese isn't as strict about separating those as English is, at least not in this tiny snippet. 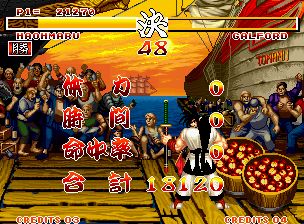 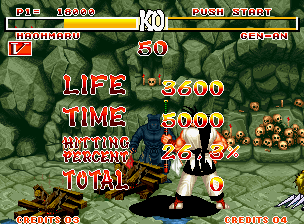 Here I just wanted to show off how much Japanese is on-screen in the Japanese version. They really went all-in on giving this a Japanese feel, including putting in kanji what would usually be in English. If you look at other fighting games of the time, like Fatal Fury, things like the point tallies at the end would be written in English, even in the Japanese versions. Victory marks would be either some sort of universal symbol or possibly a V. The timer wouldn't be marked or would be in English. But look at Samurai Spirits: nearly everything is in Japanese! The only English is the standard "credits" at the bottom of the screen and the character names. It gives the entire game a very unique and Japanese feel. 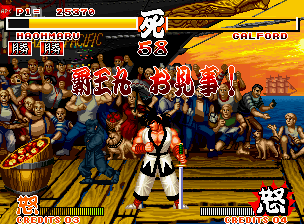 A similar thing is going on here. The announcer speaks and is displayed on screen in Japanese, which is unusual in fighting games, and the power meter at the bottom has kanji (ikari, or anger) on it. All of this were things that had to be completely re-done for the English version, and for the most part, they were. It's a very impressive bit of localization.

So even if the game translation can be, well...dodgy, I don't want anyone to doubt that the SamSho team put in the work to make it understandable in English. They did! They just also had the editor.