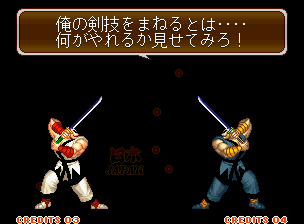 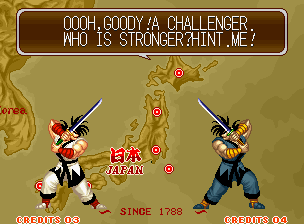 Really running out of room in that dialog box, huh.

So as you can see, the English has nothing to do with the Japanese. The Japanese is a pretty standard SNK mirror match line, the English sounds more like a generic intro.

A note about Haohmaru's speech patterns: he talks like a fairly typical rough and tumble type, but I've tried to make him sound a bit more old fashioned than, say, half the cast of Fatal Fury. The English doesn't even care, and the editor just did what they always did. 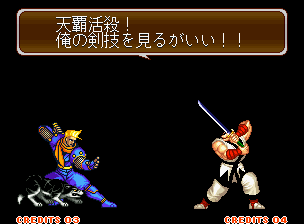 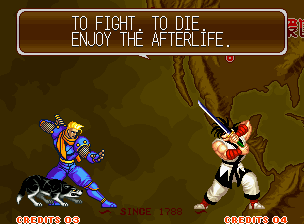 Each character gets two intro quotes, chosen randomly. Which means, for my purposes, that I was waiting a long time before Haohmaru decided to spit up both of these...

The first line starts off with an untranslatable set of four kanji. Literally, it's heaven-victory-life or death, which I tried to get across. The closest I could find to this that's been translated before is one of Kenshiro's techniques from Fist of the North Star, the Tenha Kessatsu/Heaven Breaking Impalement. But that uses a different kanji (same pronunciation) for the second character and it doesn't make a lot of sense here, so I just rolled my own.

Anyway the official translators didn't even bother and I kind of can't blame them. Neither English line bears much resemblance to its Japanese counterpart, and I honestly don't know if I matched them up correctly. So trying to analyze the translation too deeply is somewhat futile, because, well...it's just squinting at clouds. 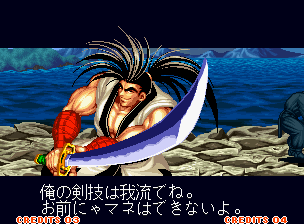 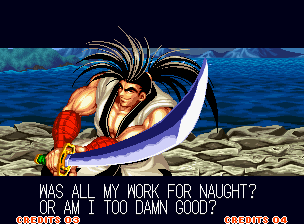 The Japanese line makes sense. Haohmaru made up his style, so only he can use it all that well. Meanwhile, the English line seems like it's confused between 1 and 2P Haohmarus. If it's edited a bit to "Was all your work for naught?" then you can kind of see the connection between the two lines, though the whole concept of no one being able to imitate a self-taught style is lost.

"[F]or naught" is a surprisingly high register for a game that usually didn't make it. Odd that it shows up on the character that pretty rarely uses a higher register in Japanese. 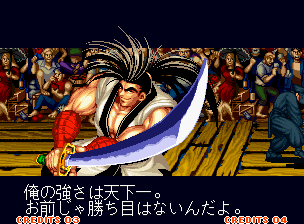 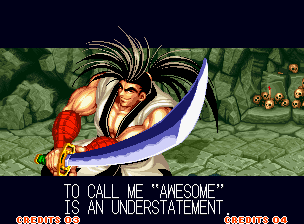 I guess there's a connection there, at least between being the best in the world and awesome being an understatement. Using "awesome" in the slang sense is incredibly 90s, which doesn't entirely sound right in the cartoon jidaigeki on Samurai Shodown, but, well...get used to that. 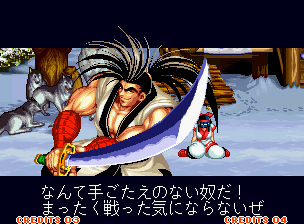 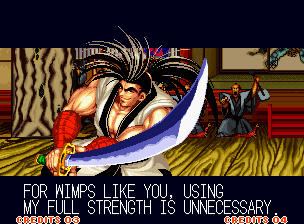 This is another one where if you squint, you can almost see the connection, but it might just be your imagination.

For instance, I can almost see "Do you have any spirit?" -> "wimps like you", but that's vague even by my generous standards. The Japanese line is aiming for Haohmaru saying his opponent is (the samurai equivalent of) a wimp, but there's nothing in there about his strength.

In general, these lines were made up. 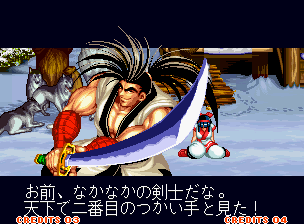 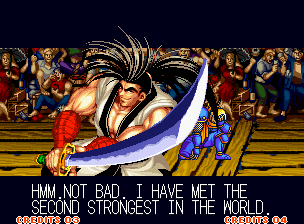 This really feels like it should be switched with the one above, doesn't it? But if there is a mistake, it's in the Japanese as well.

This is also a pretty straightforward translation, compared to all the other ones we've seen so far! It doesn't feel like the editor got to it at all, and at worst it's just kind of dull. I guess the editor just ran out of time.

For reference, "otherwise" is kicks, throws, timeovers, and certain special moves that don't kill the opponent. 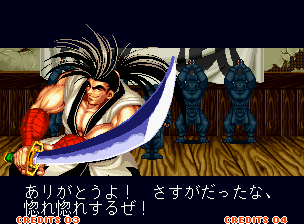 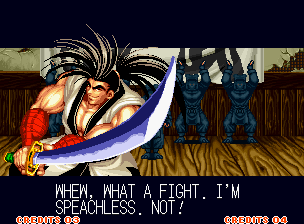 Okay, the editor definitely got to this one. Even without my translation, the "Not!" is a dead giveaway. As a result, it's hard to figure out how much this is actually trying to translate the Japanese line. It doesn't really look like it.

Even in my translation, Haohmaru doesn't sound very old-fashioned here but, uh, well...he's a punk. Sometimes you gotta write a punk like a punk.

This is the line that shows up after the scorecard at the very end. 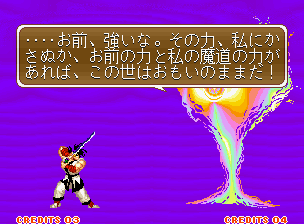 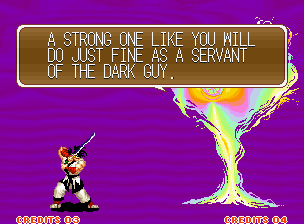 Haohmaru's first line implies he's dissatisfied with his fighting and wants to keep training. It's a pretty typical thing for this sort of character to say. The English translation isn't technically correct, but it does fit in the space permitted.

In Japanese, Amakusa says straight up he's a vengeful ghost and that he works for a dark god. I'm...not sure what the English is trying to do. I feel like I do remember "Call me _____!" from the 90s, but obviously that's incredibly hard to search for. It also doesn't explain what the extra "Amakusa" is doing there at the end. It feels like a joke I'm not getting.

Haohmaru's next line does consistently follow up from what Amakusa said, though. SNK didn't always manage this in English. It does feel like this scene got edited as a whole, not as individual lines, which helps keep it consistent in English even while it wanders away from the Japanese.

Amakusa's reasons for contacting Haohmaru are obviously edited way down in English, but they also didn't have a lot of choice. Look at how little space they had. The only option would be to add extra screens, which didn't happen in SamSho1 for whatever reason. As it is, the line more or less gets across what Amakusa wants, though "dark guy" is a very odd bit of phrasing. It feels censored, which is weird because SNK never cared about that before.

The rest of the lines more or less match and make sense. Amakusa is a little more vague on his threats in English, but it still makes sense. 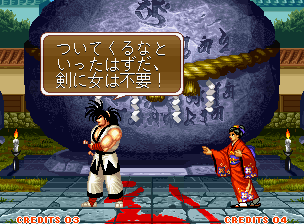 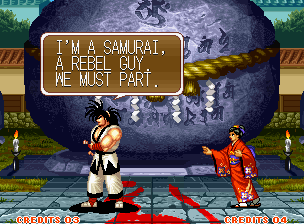 Going back to Haohmaru's thing about training, he says that's why Amakusa lost (and not because the player spammed save states cough cough) The main concepts are all still there in English, but there's a subtle difference where in Japanese Amakusa's loss is a direct consequence of becoming conceited, and in English it feels more like he was already conceited and therefore didn't practice enough.

As for Oshizu here...I usually do try to translate honorifics, but SamSho is so very Japanese I think it's all right here. Sama is a very respectful prefix, and the sort of thing Edo-era women might use with their fiances. Like how Oshizu is doing here.

Haohmaru's lines to Oshizu are the big ones that gets changed here. For the first one, in Japanese he uses a very typical sort of line, saying that the path of the blade has no room for women - in other words, having a wife would just distract him from constant practice and that's why he's bailing on his engagement. In English, this changes to something a bit more confused. He seems to be implying that samurai are rebel guys, which...okay, "rebel" is infamously relative, but in general samurai were not doing a lot of rebelling, especially not in the late 1800s. More importantly, the idea seems to be that his life is too dangerous to take a woman along, which is a bit kinder and softer than the Japanese. This does feel a bit like actual localization, where Haohmaru would come off as a huge jerk if literally translated so the editor made him sound more caring.

"Sorry" then turns into "be brave". Haohmaru apologizing is what softens him in Japanese, but since the English already softened his attitude towards Oshizu he encourages her instead. This also feels like it was edited as a whole instead of line-by-line.

The rest is all pretty straight. As for the strange woman who shows up at the end... "Mysterious Kunoichi" is what she's credited as in All About SNK Fighting Games 1991-2000 and that's what I'll call her. She's so mysterious.