You know, the Shiranui being descended from sorcerers would make a lot of sense with the whole Mochizuki rivalry thing... 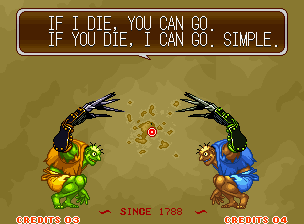 The English seems to have the same basic idea of the winner becoming the real one, though it cuts out the whole sorcery/black magic angle. Character limits strike again.

A couple notes about Genan in general:

His personal pronoun, washi, is generally used by the elderly. It gives him a sort of old-fashioned feel.

His second-person pronoun is nushi, which isn't super common but carries an air of familiarity.

"Keh" is just his vocal tic, like Earthquake's "Gheh". They're pretty similar, and both sound kind of weird and creepy in Japanese. In general, Genan talks like, well...a creepy old freak of nature. I wasn't very good about getting this across but neither was SNK.

He uses madou, which is written with the characters for evil/demon/magic and path. This generally means sorcery/black magic/heresy/etc. I went with "sorcerer" when he's talking about what he is, and "black magic" for what he uses. The official translation isn't as consistant, but generally handles it correctly. 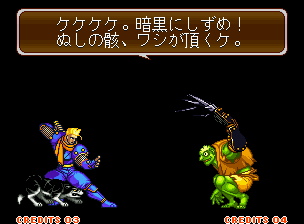 My source had these the other way round, but I think this way works better. Of course, since I'm not looking at the code here and the lines are randomly chosen, either of us could be right here.

My main reason for flipping them was the first line. "Will I get some of your estate?" feels like a better match for "Then I'll take your corpse" than the other one. Sure, an estate is less intimate than a corpse, but there's at least a similar idea there! "Fall into darkness!" seems to be generally Genan's version of killing his opponents, with the implications that he's capturing their souls/sending them to hell in some way. Letting him have some money afterwards seems like a much better deal.

The second line was just completely changed. Clearly the editor knew he was working with Genan, but also didn't feel like working with the given line. 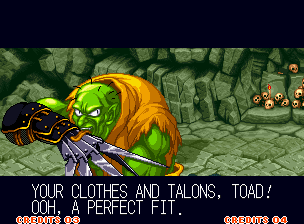 The English is harsher, but this is pretty accurate. It drops the idea that Genan is taking 2P's stuff as a souvenir or a moment, and make it sound like 2P is still alive...but overall, this is fine.

Anyway, that's over with and we're back to things being made up. In Japanese, Genan has stolen his opponent's soul and is probably going to do something bad with it. In English, he's taking revenge for getting called "freak". It is an early reference to Azami, which is kind of interesting. There's no hint in the Japanese version that Genan has a wife until the ending (of course she's mentioned in side materials, so hope you had that subscription to Gamest). 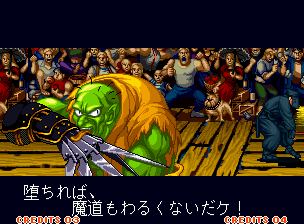 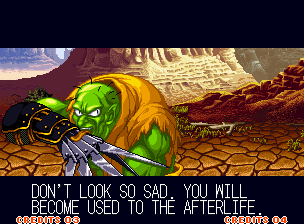 Fallen like he mentioned in his challenge line up there. I suppose the implication is that now the opponent's soul is captured, they'll get used to it, or see the benefits of black magic. In that sense, the English does make sense as at least related to the Japanese, though it drops the whole idea that Genan has captured his opponent's soul and replaces it with a general "afterlife". It makes it a bit weirder, but it's sort of related.

I guess since Genan knows the opponent looks sad, he has some sort of access to the afterlife, which fits in with him being a sorcerer and that's what you're supposed to get out of the English...but that feels like a stretch. 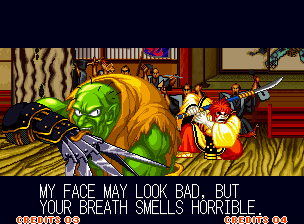 Once again, the English just has nothing to do with the Japanese. I don't really get what's going on with the English...I guess it's just a plain old turning the insult back, but there doesn't seem to be any connection between Genan looking bad and the opponent's breath smelling horrible. Just feels really random. Weird. 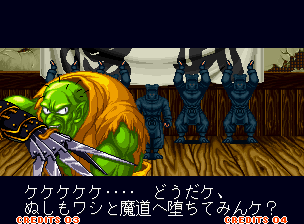 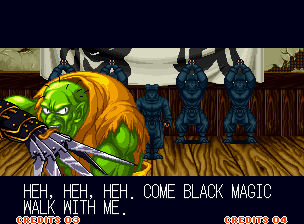 This is pretty similar, but the English is extra-confusing, as usual. The phrasing sounds like the Twin Peaks movie Fire Walk With Me which did come out the previous year and was very popular in Japan. As an aside: I always interpreted the title as "Fire, Walk With Me", but I guess it's supposed to be inviting the viewer to go fire walking? Or at least it seems the editor interpreted it that way, even though there's no such thing as "black magic walking".

Using that interpretation, the English is pretty good...though with a bizarre Twin Peaks reference thrown in.

It's interesting that Genan's laughter is "Heh, heh, heh" here. It's taken out of the other lines, and we're about to see it handled literally. 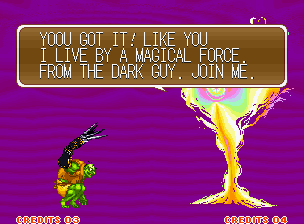 Genan is first rejoicing over nabbing someone else's soul, which in English is translated as...a goofy joke, but one that kind of makes sense in context. Or at least once you accept a creepy freak from Edo Japan is making schoolyard jokes. The editor seems to have given this a quick pass, but left a few lines alone for whatever reason.

For whatever reason, Genan's laugh is translated literally here. This is in contrast to his Clear win, and stands out considering the line just above has been localized. It also drops the question mark, making it seem like Genan is more expecting Amakusa than confused.

And after that, Genan's line after Amakusa appears is brutally chopped down. The idea that Genan recognizes Amakusa as another sorcerer is dropped, though he does notice that Amakusa uses magic. Well, it is a tiny little text box.

However, the idea that they're both the same is reiterated in Amakusa's line, and this does make it to English. Though "live by a magical force" is an odd way to put it. The English also makes it sound like Genan also gets his powers from Ambrosia, but the Japanese makes it clear he doesn't. He and Amakusa both enjoy negative emotions, but Genan doesn't have anything to do with Ambrosia. The English also has a few noticeable typos, which makes it look pretty hasty.

Genan's English reply is just completely made up and is another schoolyard joke.

As for the last line...well, if it didn't get touched up it's going to be the same because it's a really simple sentence. 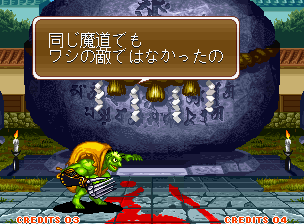 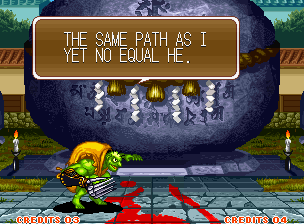 The first line is pretty accurate, and also is written in an oddly old-fashioned register. This is appropriate for Genan, but also stands out because it's the one time they do it in the entire game. Very odd. It feels like the editor didn't get to this one, so perhaps it's just stilted and the old-fashioned feel is just a coincidence? I do like the line, though.

Anyway, after that Genan's ending goes into a very direct parody of Haohmaru's, complete with Genan talking like Haohmaru instead of himself. S-sure?

It is interesting that Genan gets away with being harsher to Azami in English than Haohmaru did to Oshizu. Theoretically it could be that the editor wanted to soften the hero, but more likely he just didn't get to that line.

"Gen-an" is a legit and debateably better way of romanizing his name. The reason is because it shows that his name isn't pronounced ge-na-n. However, people on the internet seem to generally use "Genan", so that's what I went with.

Couple interesting things about the last line: first off, Kikoku seems to be the correct reading of Genan's home according to the dictionary. It's made up of the characters for oni and weep, and together they mean "wailing of a restless ghost". Since that makes perfect sense as the name for Genan's home, that's what I went with. However, if you don't have convenient access to a gigantic dictionary that will look everything up for you automatically, (I love Rikai* so much) then you'll probably try to read it as a regular name, which would be "Oninaki". So SNK isn't wrong here and possibly they're even right, I dunno.

Then for some reason the English version takes place ~70 years after the Japanese version. Why? Samurai Shodown is pretty specific about taking place in the late 18th century (French Revolution, samurai wandering around, etc) so why push it out to the middle of the 19th? How did that happen? It's very mysterious.