Did you know this character is...anachronistic? 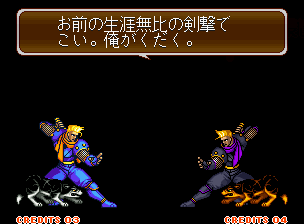 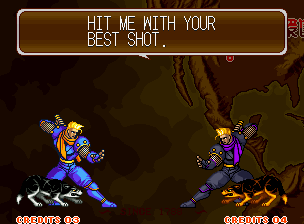 The second part is cut, but it's kind of extraneous anyway. "Hit me with your best shot" is pretty good phrasing, even if it makes me think of 80s pop. (The joke? Possibly, but it's also a common phrase so it's not exactly tracable) 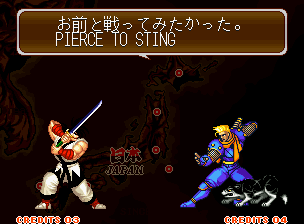 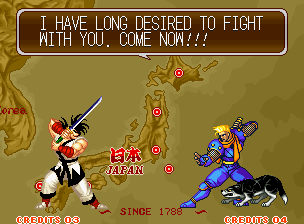 It took forever for that first quote to show up in Japanese. To give you an idea, Galford was the second character I captured, right after Haohmaru. And after that, every single time, he gave me the second quote. Seriously! (and then I didn't use it on the page, of course)

Anyway, these are...surprisingly good translations? Cut down, sure, but it's clear which one matches up with which and they're accurate on top of that. Galford in general got some pretty straight translations and I'm not sure why. Did the editor just not care about him?

The first quote loses the first sentence, probably because of character limits. The rest is a bit awkward, but works. Note the possible reference to Samurai Shodown's Japanese title, Samurai Spirits, in there. I don't know if it's intentional, a dodge around character limits, or both, but it's there and not something that anyone would've picked up on in 1993.

The second, as you can see, has English right in the Japanese. I'm not sure what "Pierce to sting" is supposed to actually mean, it's possibly just there because Galford's American and Americans speak English. The official translation sensibly drops it in favor of something that makes more sense in context. "I have long desired" sounds awfully stuffy for Galford, though.

(my inner insufferable pedant feels the need to point out that at the time California was part of Spain, not America, and therefore Galford is Spanish, but, well...so was Texas.) 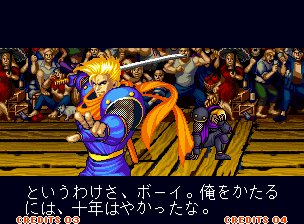 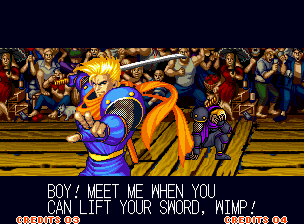 It's a pretty generic taunt in Japanese. We've seen "ten years too early" before, along with stealing someone's name. I kept those in to show how nicely the official translation handled it, with having Galford taunt 2P about being weak, complete with SNK-approved "wimp".

He does actually say "boy" in Japanese, but the way it's used in the English makes it sound more like an exclamation/intensifier instead of an address. I assume it's still supposed to be an address, but maybe not...? 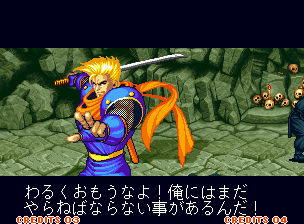 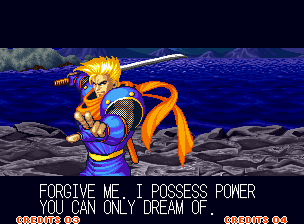 This is a little different. Okay, it's really different. I'm not sure how we got from A to B here, but Galford goes from cheerful hero to oddly formal arrogance. The Japanese line is a pretty standard heroic line, and there's no obvious misreading to get to the English line. 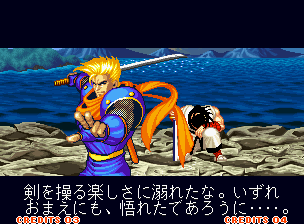 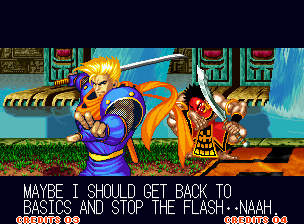 This feels like misunderstood context. I can see how "lose yourself in the fun of swinging a sword around" turns into "get back to basics and stop the flash", but the Japanese is talking to Galford's opponent and the English is him talking to himself.

On the other hand, the English line makes more sense in the context of a victory quote where Galford just killed his opponent so maybe it's on purpose. This does have the taste of the editor around it... 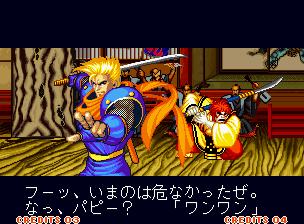 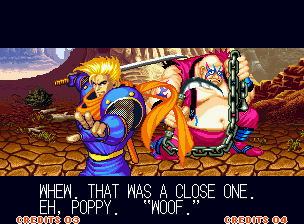 Official translation is a bit more stilted and could use some commas, but the lines are almost exactly the same because, well...it's a simple line! 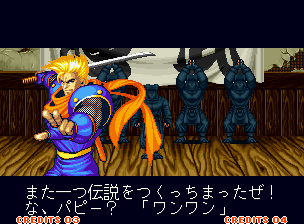 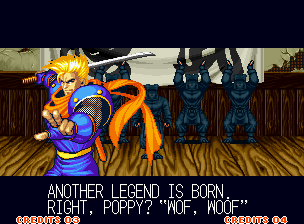 And again. I'm not sure if Poppy's "wof" there is character limits or a typo, but either way... 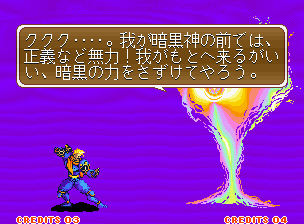 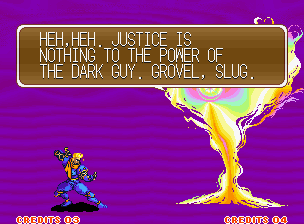 The first two lines are exactly the same because there are only so many ways to translate that phrase.

The third line definitely has the editor's touch. It makes Galford sound a lot less serious about it, though I appreciate the "chill!"

Galford also knows about Ambrosia. The character limits make the English line especially confusing, because it sounds like Galford is calling Amakusa Ambrosia right after being told to call him Amakusa. The Japanese makes it clear that Galford is identifying Amakusa as Ambrosia's minion.

Amakusa's line is pretty close, except that he wants Galford to come with him instead of groveling before the power of darkness. I suspect character limits, as usual. It's a big change, but it's not a particularly noticeable or objectionable one, if you get my meaning. It's a pretty generic offer either way.

In Japanese, Galford is specific about including Poppy in beating Amakusa/Ambrosia. In English he forgets Poppy, but breaks out the powerful "buzz off, beanbrain". "Beanbrain" is, in fact, an entirely new SNK insult. It's not exactly common in the real world and might've been made up here, though it's simple enough I wouldn't bet on it.

The last line is completely rewritten, probably because it feels repetitive as-is. Here's where Poppy shows up in the English version! She's not forgotten, just moved a little. 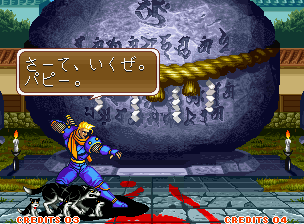 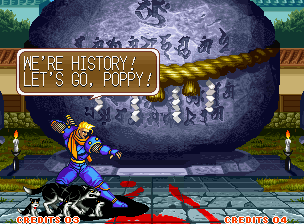 In Japanese, Galford says Amakusa was a tough guy, but this is changed to a tough battle in English. Six of one, half a dozen of the other.

Galford sounds more calm about the jewel in English. He's supposed to be mad about it, but that didn't come across. That fits the style of the base translator, whose work would (sometimes) get touched up by the editor. Not here, though.

Amakusa goes from being possessed to being under the influence of an evil spell. I blame character limits, as usual. It's a bit of a lore difference, but it's not one that's particularly noticeable (and you can argue that possession is a kind of spell...). "Be praised" is slightly odd phrasing, though...though it is formal, which matches the Japanese.

I have no idea where "We're history!" came from. It makes it sound like Galford's dead, but he's just leaving. Is this some weird 90s slang I don't know about? This is the one line from Galford's ending that sounds like the editor even looked at it, and that's mostly because it's inexplicable.