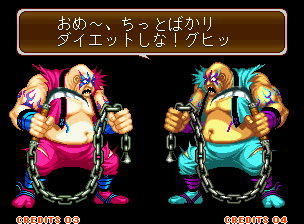 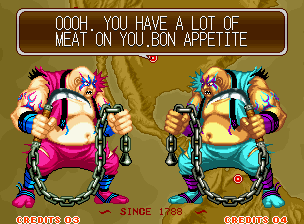 "Gheh" is how I'm going to handle Earthquake's little vocal tic, which is kind of a grunt/chuckle thing. Get ready to see it a lot! The official translation consistently ignores it, which isn't all that surprising.

In Japanese, Earthquake has a very distinctive speaking style, full of slurring and shortenings. I tried to get that across in English as best I could. As you might expect, the official translation completely ignores this and just translates Earthquake like everyone else.

So for this line in particular, the basic idea that 2P Earthquake is poking at 1P's weight comes across. But where the Japanese line is straightforward about it, the English wanders off into implied cannibalism. So that one addition feels like maybe the editor, but the rest could be untouched. 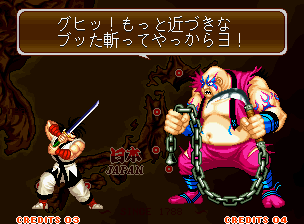 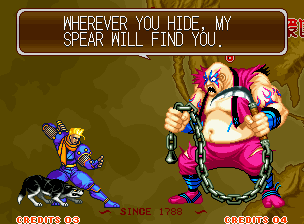 As usual, I have no idea if the right translations are with the right quotes because they have no relation to each other. I guess there's a vague relationship between the original and translation of the first one, but I might be imagining it.

Earthquake doesn't even use a spear. I can't see anything in the Japanese line that would relate to spears. Did they mix up a line with Kyoshiro? How did that happen? It's shared with Tam Tam, which just adds another layer to the weirdness. 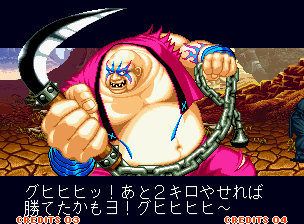 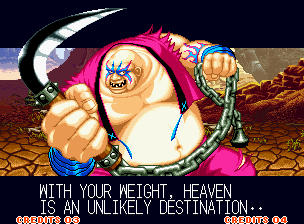 Well, they're both about weight.

In Japanese, Earthquake says that being lighter would've let 2P Earthquake win. 2 kilos is what he says, which seems weirdly specific, especially for Earthquake. I suppose that's the joke. In English, Earthquake is just too heavy to get into heaven. It's hard to get up there when your soul is weighed down by gravity.

I suspect that double period at the end of the English quote is supposed to be an ellipses, they just either ran out of room or typoed it. Could be either. 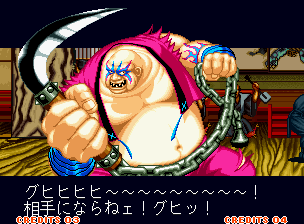 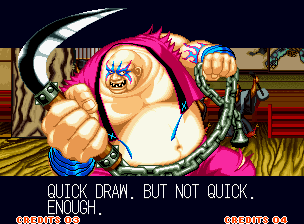 I'm not sure how these relate to each other, but that's common in this game.

The "quick draw" bit seems like it's playing up Earthquake's wild west stage background, which makes the history pedant in me wants to point out that SamSho is in the wrong era for that, but the dumb game player just thinks it's cute.

The extra period looks like it was just some sort of editing error, combined with a line break to make it hard to catch. It's harder to see in the screenshot, but it sure looks silly when it's typed out. 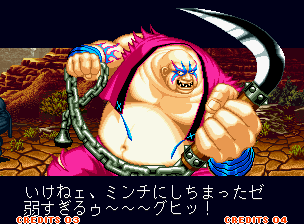 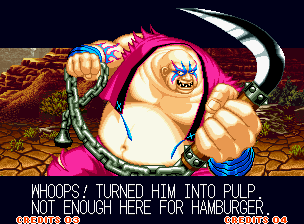 This is pretty close, actually! By the standards of this game, at least!

So in Japanese Earthquake is specific about turning his opponent into mincemeat (which I rendered as hamburger), but in English he specifically doesn't because he went too far and got pulp instead. On the other hand, the basic concept and even a few words are the same, so I'll take what I can get.

If you're wondering why Earthquake is facing the wrong way here, it's because I was completely incapable of pulling off his one deadly special move and had to bait the CPU into doing it to me instead. I'm not good with Earthquake. 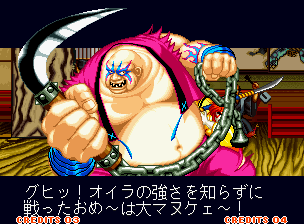 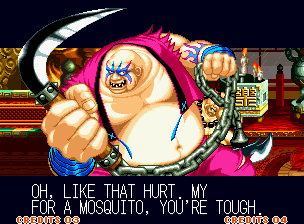 And we're back to just making lines up. 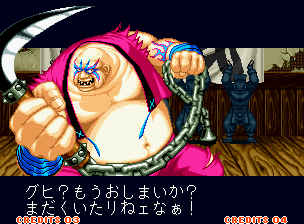 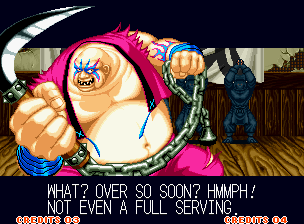 Kishi got this line! (minor modifications from me)

This is, perhaps surprisingly, very close. It mostly comes down to differences in phrasing, and I like the official one quite a bit. SNK, as usual, didn't try to make Earthquake really sound like he does in Japanese, but it's still a nicely-done line. Credit where credit is due. 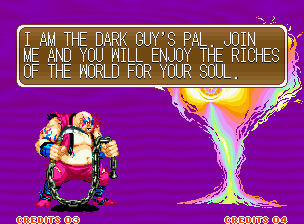 The thing that stands out to me here is that the English gives a reason for Earthquake to turn Amakusa down, while the Japanese doesn't really try. I guess the idea is that Japanese Earthquake stopped listening during Amakusa's long explanation, but you'd think he'd at least hear "treasure".

It's kind of funny that "my dark god" turns into "the dark guy's pal". Makes it sound like Amakusa and Ambrosia just hang out on weekends. 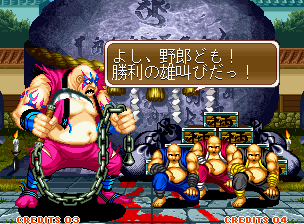 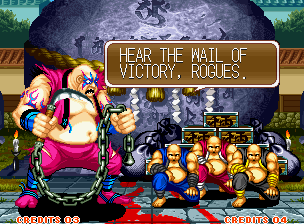 The first line is technically wrong, but I guess the idea is that he's stealing Amakusa's gem thing. But yeah, he's just taking treasure in general, not recognizing any particular bit of shiny.

"[T]he wail of victory" is an odd phrasing, but I can't entirely tell if it's the editor or just the translator being extremely literal. The phrasing in general is misleading, because Earthquake is telling his men to shout in victory (with the implication this is a regular thing for them), but the English makes it sound a bit like the rogues lost and he's crowing over them.

The rest is mostly just uninspired rather than changed or wrong.