Half the reason KoF exists, so they get a fair amount of system acknowledgment. This would change quickly. 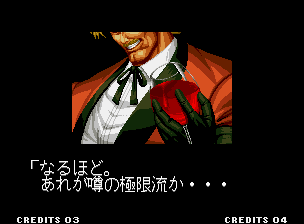 The "ryu" in "kyokugenryu" just means "school" or "method", so I usually drop it. As you can see, the official translator(s) did not.

The main idea here is that Rugal has heard of kyokugen karate, but hasn't seen it himself. The main difference is in word choice, but "rumoured" and "famed" both work, I just think that Rugal would be more hearing things from the underground and "famed" sounds like it comes from official channels. Maybe that's me.

There's a minor difference in that Japanese Rugal is expecting the Mexico Team to make it, while English Rugal isn't so sure. Since KoF94 is so literal, it makes me wonder if I misread it...but I think I'm right. 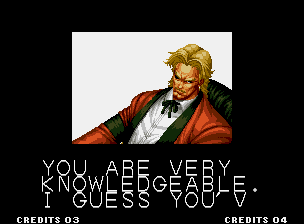 The Japanese is very literally "merchant of death", which idiomatically means "arms dealer".

There's a minor typo in Rugal's line, which I think a lot of people would have pointed to as evidence of a bad translation. But nope, this is very straight like all the story in KoF94.

It's interesting to me that Takuma's still kind of the dark, underworld character he was back in AoF1 here, or at least that part of his past is acknowledged. KoF94 is general is a weird transition point for the AoF crew, caught somewhere between what they were in AoF1, what they'd become in AoF2, and what they'd really become in KoF.

The main thing here is clarifying what Rugal means when he's talking about how it depends on the practitioner. It's a pretty standard moral about it's not about your fancy moves it's about your heart, but that's pretty confused in the official translation. It almost sounds like Rugal uses kyokugen karate too, but of course he doesn't.

I used "boogie". Have I become the SNK?

What stands out to me is that Takuma's whole thing about having to strengthening kyokugen in order to defeat more powerful enemies in the future is completely dropped, which makes Robert's reaction a bit of a non-sequitur.

Robert's line is very literally translated, but ends up sounding good anyway. Ryo's, on the other hand, is pathetically plain.

All in all, it's KoF94. The main lines of what's going to happen with the AoF team for the next...four or so games are laid down here. 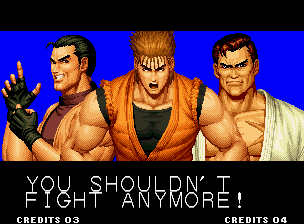 The line vs America Team makes a lot more sense with the added context that Ryo is ragging them, like usual. Please enjoy one of the last times Ryo gets to be rude and sassy, because Kyo is going to take over that niche real, real soon.

There's a bigger difference between China and England in Japanese too. One is a brag, the other is telling Yuri to knock it off like the rest of the team.

I'm really not sure where the English Italy line came from. Very strange.

The rest are super chopped down, but generally at least get the basic idea across.

No, Robert's line against America Team isn't a bad translation, just a little awkward, with a badly placed typo.

The line against England makes it clear Robert is specifically talking to Yuri here, not Mai or King. You could probably figure that out from the English, but it's nice to have it confirmed. 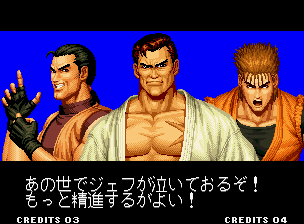 Takuma is absolutely the member of Mexico Team who loses the most in translation. Pretty much all his lines lose something, if it's context or flavor. Poor guy.

For instance, against America he's not just encouraging them, he's trying to convince three sports stars to come to his dojo (possibly because they will pay a lot of money). Against England he's again more obviously talking directly to Yuri, and the bit about "teenage rebellion" is cute. And against Korea he's more obviously just dispensing advice.

The line against Brazil is interesting. The Japanese line does literally say he has more experience, which I guess the translator decided to emphaize because ha ha good luck getting all that line into the character limits. But what he means is that he's seen more in the underworld than they've seen in the army.

Against China he's directly praising their psychic powers, saying they're even better at using their ki than kyokugen karate - pretty high praise! This is completely obscured in English.

And against Japan, he's specifically saying that Kyo is lagging behind his father, because all old guys know each other. This just gets turned into a generic taunt in English, and doesn't mention Saisyu at all.