"[N]ot fighting for personal profit" is basically being a selfless do-gooder, right? Right?

The main difference that's not me flexing my SNK muscles (since SNK isn't here to do it for me) is that Rugal's going to tell the China Team their values suck in the official translation. That's not a bad translation, since the word means tell/teach, but I figured that since he's going to be beating them up instead of just lecturing them, it needed a stronger verb.

Chin's line in English sounds like it could mean there are evil spirits just hanging around in general, but he's more saying that he can feel Rugal being evil as soon as they meet.

Other than that, this is pretty much identical. It's a pretty straightforward scene. 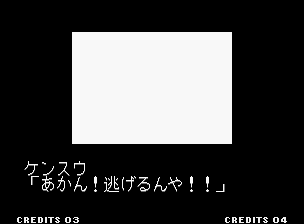 I just generally translated in a somewhat higher register than the official translators. It is interesting that in the Japanese Rugal seems to have identified so hard with evil that he thinks it's natural to declare himself immortal as long as evil exists.

And Kensou...look, you can say anything you want in the arcade. 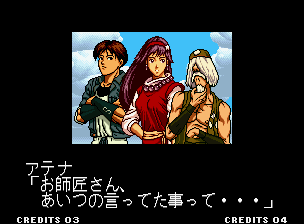 It's a little more obvious that Chin is saying that there will always be people fighting for good as long as evil exists in Japanese. It makes sense in English, but he could be talking about psychic fighters or kenpo users or something...but he means people who fight evil. "You know what I mean..." is a surprisingly long-winded thing to put in there, considering the character limits.

"My goodness" is also a very strange choice. As usual, I can only assume they had no idea what character was saying the line. As for my choice of "let's blow this popsicle stand"...look, Kensou's a dork, okay?

Athena is less scolding Kensou for telling them to celebrate and more sighing and shaking her head.

The rest is fairly minor. 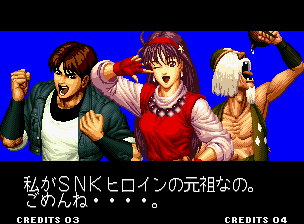 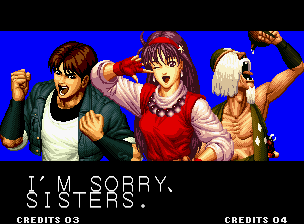 I have no idea what's going on with half of these.

Athena's riff on the usual skill > power lecture to the America Team turns into ragging on them for being sweaty, the "you're famous!" compliments to Italy Team turn into a weird put-down of both teams, a reminder that Athena's Japanese against Japan Team turns into a more standard quote, and compliments to the Mexico Team turn into scolding. It's very odd, and really out of character for the usually straightforward KoF94. It's enough to make me wonder if I'm misreading something.

Kishi does point out that it makes more sense if you flip the English America and Mexico quotes, but that doesn't work for any of the others.

A couple of other notes: Athena's quote against England sounds like girl power solidarity in English, but it's actually about her seniority in the SNK heroine ranks. As for Korea, I guess the balance is in terms of justice/heroism/Kim isn't a criminal like Chang and Choi. It's interesting that she thinks the team is cool either way.

Overall, very mysterious. I really have no idea how the weird quotes happened unless the editor did one quick sweep and only really hit Athena...but the lines just aren't wacky enough for it to be the editor. (okay, maybe vs America) They read like straight and direct translations of completely different lines. Odd. 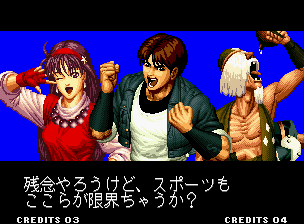 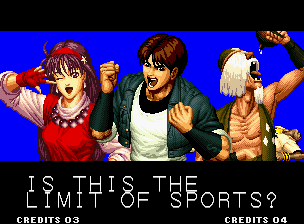 Kensou's lines are more in-line with what we expect out of KoF94. The odd one out is the line against England, which...yeah, I got nothing. It again sounds like they translated someone else's line, but I'm not sure whose.

The rest are just cut down and stilted like usual. (or are they a bit more stilted?) One little bit of flavor that was cut is Kensou ragging on Italy Team with his seniority in the SNK hero ranks. It's too bad, because it's a cute joke. On the other hand, I can see someone not entirely familiar with SNK's history translating it out because it doesn't make a lot of sense on its own.

Kensou speaks with a Kansai accent in Japanese, much like Robert, but like Robert, since SNK has never bothered trying to render it in English I'm not going to either. 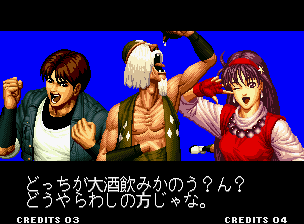 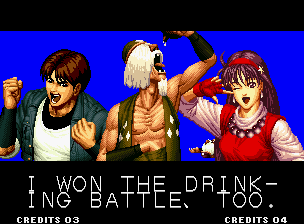 Hey, did you know Chin is a drunk?

Most of these are typical for KoF94. They're cut down and lose the funnier jokes, but there's a direct line from A to B. The changes to the line against China Team are actually pretty clever - instead of joking about who's the drunk, Chin says he won the drinking contest. The same sort of idea, but in a much shorter line.

I'm sad the bit implying that Chin knows Tung was cut from the Italy Team line, since I think it's really funny how all the SNK old men know each other. Also makes up for Chin not being able to make Psycho Soldier jokes like Athena and Kensou.

The Mexico line might need a bit more explanation. In Japanese, Chin uses a typical phrase telling old people to act their age/not exert themselves. I'm pretty sure the joke is that he's telling Takuma that when he's obviously much older. But since you can drop the subject in Japanese, the translator assumed he was talking about himself. Oh well?