Ralf and Clark redeem themselves after Ikari 3. And Ikari 2. And kind of Ikari 1. 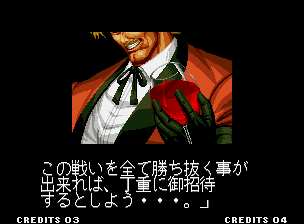 The English has to be edited down, even with an extra screen. The character limits on KoF94 were really tight! No room to pick out Rugal making a point of how polite he's going to be.

"[L]et's invite them" vs "I'll be sure to invite them" mostly comes down to what exact verb form you think Rugal is using there. I made my decision based on it not seeming like Rugal's talking to Mature here. 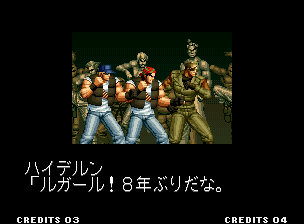 So let's see here...we have the usual split between the official translator and me on if Rugal calls his collection a "gallery" or a "museum". I think a gallery sounds more correct for things he's displaying as art, but neither are technically wrong I guess.

I tried to make Ralf sound a little rougher, which the official translator didn't bother with.

I also tried to make Rugal's reply sound a little more coherent. The official translation jumps around a bit because again, every line had to be cut to the bone to fit inside the character limits.

Rugal's reply to Clark, meanwhile, has a missing word that's covered in-game by a screen change. I suppose "the end result of all I have beaten" is technically grammatical, but it sure sounds weird.

It is interesting that official translation expanded the screens Heidern's "it's been eight years" when there is a shorter way to say it. It suggests a translator that wasn't super good with informal English speech, which...yeah, matches the rest of the game. Notice how they did make sure 8 was a numeral instead of spelling it out - gotta save those characters!

Rugal sounds more sincere about apologizing for killing Heidern's family in English, which obviously isn't right. But the next line sets things straight.

The official translator and I split on if we should emphasize Rugal saying that Heidern can live happily with his family in the afterlife or them not missing him anymore. They're both kind of in the Japanese in a way that's hard to mash into English. 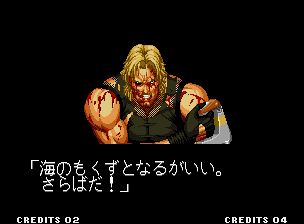 "You are history" is a surprisingly idiomatic bit of English for KoF94. Along with "A watery grave awaits you!", it suggests that a native speaker did a quick pass at some point, though I'm not sure why they missed the opportunity to make it "You're history" instead.

And speaking of watery graves...it's not here! We already know the line was redone each time instead of being accessed from a central location, so it's not surprising there are differences. This is a pretty major one, though! It's also interesting that "You'll be swallowed up by the sea with me", though not entirely graceless, is not as good as "A watery grave awaits you". Maybe they did Brazil Team first...?

I tried to make Heidern sound more military and call a retreat instead of "Let's get out of here!" That sounds more like Ryo or someone. 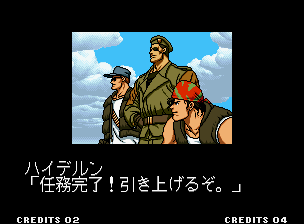 As for Ralf and Clark...look, there are only so many ways to translate that. 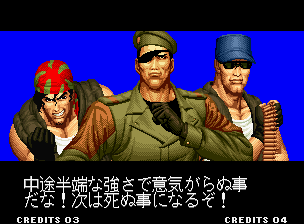 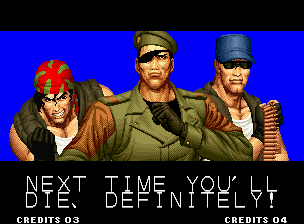 You can say whatever you want in the arcade, who cares.

Most of these are just very cut down in English, as usual. Probably the most interesting is the explanation of exactly what Heidern is doing with the Cross Cutter in the Korea line, which uh...sounds better in Japanese. I do appreciate the poetry of "Nobody can stop my chop!". 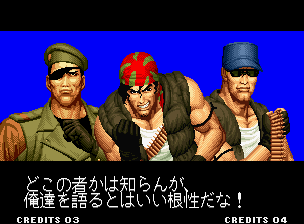 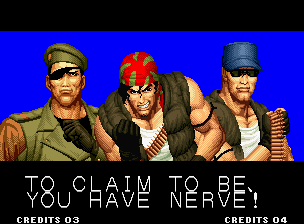 I'm not entirely sure what's going on in the Brazil line, and I don't think I got it completely correct. (mostly the "talk about us" part, because that's the bit that doesn't make a lot of sense) "To claim to be" is very strange even for KoF94, so at least I wasn't the only one unsure of how to handle it.

The England line is specifically to the entire team, which is why I ended up with "little misses". The official translation just drops it entirely, which was probably the right choice.

Korea has that same "go home and try again" idiom that gave me so much trouble back in AoF2. I did my best and went with going back to basic as a more military-favored phrasing. Meanwhile the English decided to only keep the other half of the line, which...can't blame 'em. 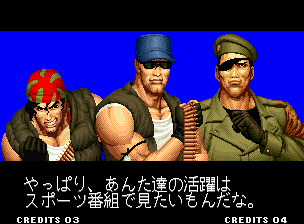 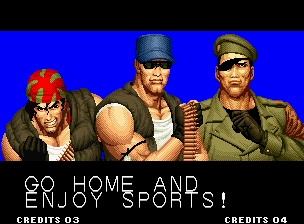 In the line vs America, Clark's more saying he just wants to watch the America team play sports on TV than that they should enjoy sports. But I can see how they got from one to the other.

It's kind of cute how enthusiastic he is about meeting the Brazil Team. I don't think anyone else has asked to take a photo with their doppelgangers.

I guess "mysterious" is about as good as you can do with "hidden side" in so many characters. I'm not super happy with my version, but I did my best.

I struggled with the line vs Korea. Clark brings up 心技体/shingitai, which refers to the three qualities of a martial artist or athlete: heart, technique, and body. You gotta have all three to be successful. By joining with the Ikari Warriors, the Korea team will get trained in all aspects, which will buff out all the rough spots. Needless to say, this is really hard to get across in any coherent way in English, so I went with a famous US Army slogan. The official translation just got to drop it completely.

And as usual, the rest just lose half the sentence, but the other half comes across more-or-less intact.