FF3 has some common text, and here's where it will live. 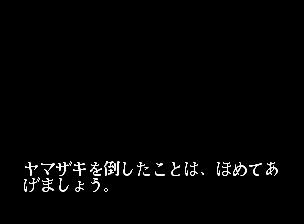 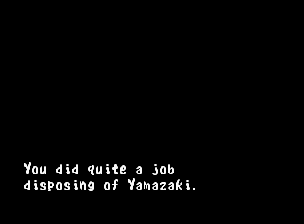 Well, I couldn't get Ending A to trigger no matter what, but then I found the script in All About Fatal Fury 3 and Kishi decided to get the screenshots for me. Everyone thank.

This ending happens if you perform badly and lose one around of the Accident fight. It's a bad end that doesn't let you fight Chonshu. Pop up another 100 yen/25 cents and try again, sucker.

This comes after Yamazaki's character-specific line and is common to all. One thing I did cut out/genericize was that each character's "Huh? What?" line from their teleport to Delta Park sequence comes between Chonshu's lines here. It's exactly the same, so just pretend Sokaku is yelling "W-What in the name of Nervin the Ninja!" in the middle.

Chonshu doesn't directly praise the player for defeating Yamazaki in English, but it's basically there. There is a nuance difference between the player not being qualified to meet Chonshu and Chonshu not having interest in the player, as the former is a much more direct gameplay hint. In general, the English versions of SNK games were not as good at giving game tips in the text. That said, "when you improve a bit more" is a solid hint, so it's not like the concept was entirely cut from the English version. 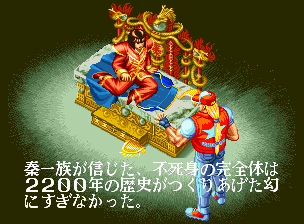 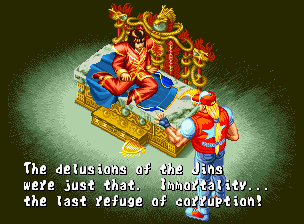 Kishi did this as part of charging through all of Terry's endgame text.

Ending B is the same for all characters. You get it if you were good enough to get to Chonshu but not good enough for Chonrei. A few mistranslations should pop out at you, like, uh...the specifics of what happened to Chonshu. And the game explicitly saying the scrolls are bullshit and don't work.

That last bit is kind of important, because it's why Geese dies in Real Bout. He's not immortal because of the scrolls. They didn't help him survive after FF1. He survived falling off Geese Tower because he's just that tough.

Now, I'm not sure if all of that got retconned later or not. But FF3 itself is pretty clear: the scrolls don't grant immortality. They are literally just a MacGuffin.

(Japanese fans seem to have settled on the idea that Geese survived FF1 by figuring out how to throw Shippukens right before he hit the ground, thus breaking his fall. I don't know if this is backed up in secondary materials or is just widely-spread fanon.) 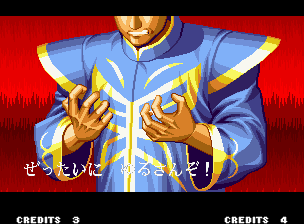 Yeah, Kishi did this too.

Chonrei's introduction is the same for all characters.

It's somewhat-rare to see the screens not match up like this. It's all over the place in AoF2, but not in any other games I've seen so far. I don't know how all of this is handled inside the Neo Geo itself and if it was difficult to force the Japanese and English out of sync like this, but I can say that it wasn't common.

Other than that, the translator/editor is ragging on Terry's hair even in text that gets reused. Dang. 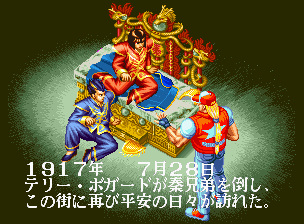 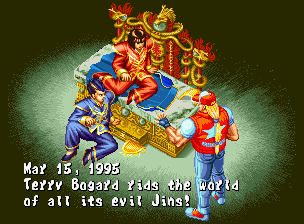 (this says Terry because something had to go there and he's the main character. Other characters have their name and birthday in the right spot.)

And uh...major, obvious mistranslation/making shit up in the second line. I think everyone noticed something was up with the FF3 translation here. The Jins sitting up while the narration rants like the player just killed them is kind of a hint. So no, the Jins are fine, the player just knocked the evil spirits out and returned them to being more-or-less normal kids.

(since when does Southtown have days of peace?)

Every character's ending is on their birthday, so it's pretty hard to figure out when FF3 is actually supposed to take place. I generally assume Terry's story is canon, but the nature of FF3's story makes that unclear.

I think Kishi used the arcade version, which must have had a similar date-setting effect as FF1. The weird part is that I can't find a mention of this anywhere. But that's the only explanation I can think of for that date... It hasn't shown up for any of the other characters I've done, and I am doing this on the home version. It's easiest to be able to switch back and forth between languages.

The middle line is the same for most characters...in Japanese. Only Geese doesn't return Southtown to days of peace. In English, some characters rid the world of all its evil Jins and some don't.

But the last line, about how the scrolls are bullshit, is not the same across all characters in Japanese, but is in English! More details on Mary, Franco, Bob, Hon Fu, and Sokaku's pages.