Bring back this portrait as well, cowards. 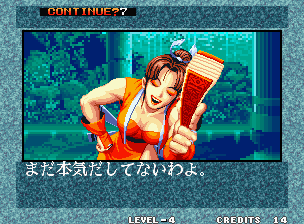 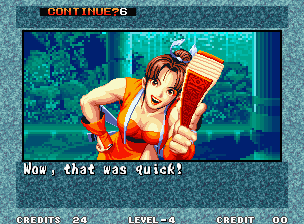 It's different, but the line is so generic I feel like it doesn't matter much. Mai's still making fun of you for not putting up a fight. 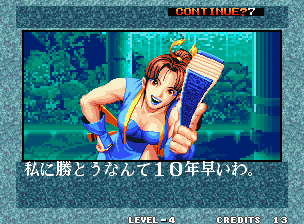 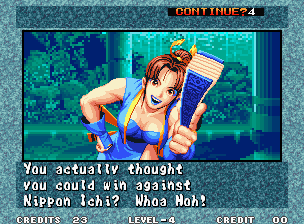 As I've said previously, I like literally translating "ten years early" just to show off how SNK didn't. So here we have...a Nippon Ichi reference, because American audiences are definitely going to get that.

I mean, maybe they would. I wasn't in arcades in 1995, maybe this was well-known. I kind of doubt it, though.

Like the first quote, it's roughly the same feeling, just from a completely different source. Free localization, or rewriting? You make the call. 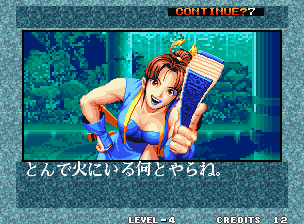 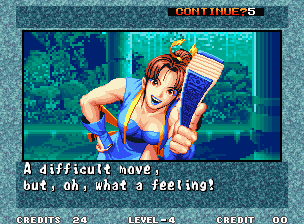 A cut off proverb? I can understand why they just replaced it with a Flashdance reference and called it a day. I can't say for sure if they didn't recognize what was going on or just decided to throw in the reference anyway because honestly for SNK it could be either, but that's what happened. 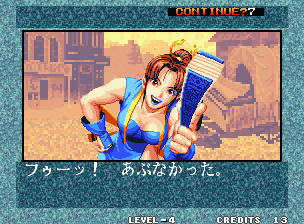 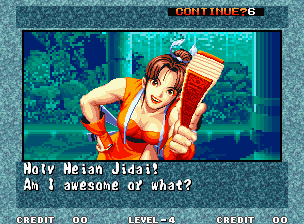 The Heian jidai, or Heian period was a period in Japanese history lasting from 794 to 1185. It's a famous period, with very recognizable fashion. It's a popular period to time-travel to as well.

...so I have no idea why they said that except that it alliterated and they decided they wanted to make a 60s Batman reference. You know what, fine. Fine.