Oddly, "capoella" is not used in FF3, but it is in Real Bout Fatal Fury. I thought it was new there, but no. So why is it "cooperia" in-game...?

FF3 consistently changes Pao Pao Cafe 2 to Pao Pao Cafe West when talking about the branch Bob runs, and I think it's really cute. It sounds much more natural in English. (they did, sadly, not update the in-game graphics so the stage name is unchanged. But other than that!)

The English adds that Bob is busy opening up the new location, which is another cute detail. Someone also assumed that players wouldn't necessarily have played FF1 or might not remember who Richard is, so he gets specified as "Andy's friend". The only weird thing here is that, after the prologues, wouldn't it make more sense to say "Terry's friend"?

That Bob believes capoeira is the strongest martial art is dropped in English, which makes that whole sentence confusing. He'll seriously hurt anyone who says "capoella" isn't very important to him?

That Bob is mostly just here to impress Richard by beating Terry is completely dropped. Instead we get more "cafe owner" jokes, which...well, it's not like the Japanese script didn't make those either. But it would've been nice to keep Bob's character motivation.

The second English sentence is added. "A taste of knuckles and toes" sounds really weird to me. Who says that? "A taste of my toes" would make slightly more sense, but is still a damn weird thing to say.

As I was saying... While not as bad as "kapoeral", it's more inexplicable and much, much more frequent. As in, they do this every single time it comes up.

At least they're consistent?

The line itself is considerably punched up, but misspelling aside, I actually like this. "Cooperia crown" is a nice bit of alliteration, and the rest sounds pretty good. It does have the added implication that Bob has fought doppelgangers before, though. 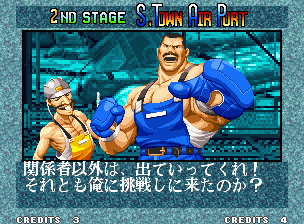 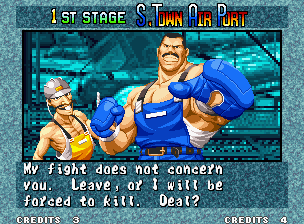 Yep. Pretty straight, a little cut down for the English but it feels like it was on purpose and doesn't sound too bad. Huh.

There's a bit of a change in nuance here. Japanese Joe heard Richard praising Bob and is skeptical about Bob's real abilities, English Joe got a warning from Richard and expresses no skepticism. It changes the relationship between Richard and Bob a bit!

"Legendary Muetai madman" is...slightly different from "legendary Muay Thai champ", and not just because I can spell Muay Thai correctly. Within reason for this game, though.

You can tell exactly what joke they were going for, and how one typo just ruins the whole thing. FF3 has a lot of typos, but this one probably hurts the most.

The Japanese line is pretty bland, so the English line would honestly be an improvement if they had caught the typo. Alas.

I did my best to try and avoid innuendo in my translation because I don't think it's there in the Japanese, but it's hard. I'm pretty sure he's just inviting Mary over for another fight, though. The official translation, on the other hand, ran with it.

Yamazaki's first line keeps the first half in English, but changes the second half to Yamazaki straight telling Bob to go home instead of scoffing at him. It doesn't lead into the following English line at all, unlike the Japanese.

Second line is same as Terry. Which works about as well for Bob as it did for Joe

Interestingly, it looks like Yamazaki's advice got moved from here to the prefight in English. It's not necessarily a bad change, though the way it was executed leaves a bit to be desired. As a result, Yamazaki's English line is considerably cut down.

Bob's desire to spread capoeira is cut, but replaced with him wondering if he's wandered into a TV show. That's honestly pretty cute. I dig it.

So in Japanese Mai just heard Joe got his ass kicked and wants to try her hand against the newbie. In English this turns into a weird...threat?? I guess the idea is that Mai is saying she'll beat Bob? Maybe?

This is the first completely inexplicable translation on Bob's route. I'm a bit proud.

Bob calls Mai 'Mai-san'. She actually calls him 'Bob-san' too, I just couldn't work out a good translation for that.

The only really weird thing here is "Bobby boy" popping over after AoF2 finished. Besides that it's a reasonable translation, all told.

Bob isn't really talking to Andy in Japanese, but he is in English. He's also a bit more...rough in English. (Japanese Bob uses the same polite neutral speaking style Richard uses) "Cooperia fighting style and me" is a very odd way to phrase that.

Still, the idea is there.

The only place I can find "what in the name of Moses" on the internet is the title of a video game playthrough from January 2020, and I'm going to go out on a limb and say that isn't the source for this. So I have no idea where that one came from because I have never heard it before. Anyone?

And Bob's reply turns into...this. Punched straight into another dimension.

"Enjoy traction" is so close to being a normal action-line sort of thing. So very close.

Another joke about people not being able to remember how to say capoe...er, Cooperia. Other than that, this is just a straight translation, nothing interesting about it.

The English loses the bit of nuance that Bob is specifically saying capoeira is better than the Mochizuki style, not just that he's better than Sokaku. I tried to make sure that little bit got across in my translation, even though it's somewhat awkward in English.

Yeah, it's literally "number one rookie" in Japanese there. So I'm once again lying about my translation, because I changed it to "rising star". Oh well?

This is a painfully straight line. Even the nuance change between my "when" and the official translation's "if" makes sense. Basically, Japanese has a grammatical form that means "If A, then B" if A is only a possibility, but "When A, then B" if A is certain. In other words, both translations are correct, we just guessed differently on how confidant Terry was feeling there.

I maintain it's both more in-character and a stronger overall conversation if Terry is taking his victory as assured, but it's not like I have access to the original devs here (and probably neither did the official translators back in the 90s).

What do I even say here? It's good! Done! Moving on!

It's weird. So many of these are just kind of barely touched up, but still sound okay. Usually when that happens my first guess is that they were barely touched up and the editor/localizer focused their attentions elsewhere. It would make sense.

I honestly like the official translation better than mine.

This switches from Bob talking directly to Geese to Bob talking about Geese. It's an interesting reversal of the Andy line earlier.

The bit about Richard telling Bob about Geese is removed, but "old sack of tired bones" is a neat way of phrasing that line. "In my book" sounds kind of weird tacked on the end there, but I think it's cute.

As you can see, typo aside, the official translation is way better than mine.

Not much else to say here. 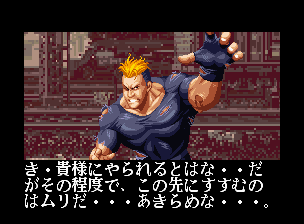 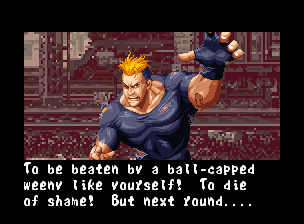 Kishi got the pics. Thank you.

Since only the first line of the ending is unique, I put the other parts over here.

And this is same as Terry.

The first line has a minor nuance change: Japanese Bob only ever heard about the secret scrolls from Yamazaki, and has presumably been running around trying to track him down again. English Bob has heard about them from other people.

Yamazaki is extra talkative in Japanese here, but not helpful like he is in English. The idea is that he doesn't believe Bob really has no idea what's going on, even though it's true. Meanwhile as usual English Yamazaki just tells the player where to go, as if they had a choice. "Diddly" is a heck of a word choice there, though.

Bob's last two lines are the same as Terry, for some reason. 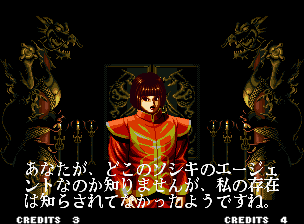 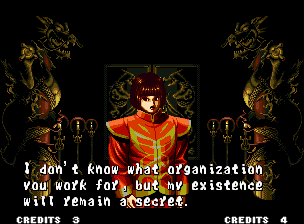 Chonshu's first line for Bob...is a rephrase of his line for Terry. I'm not sure if it's weirder that it's so close, or that they bothered to rephrase it.

I feel like I should say something about Chonshu's third line, all about the power of the Jin, but I honestly don't know what I can say that's not already there. It's powerful, in any case.

There's a bit added in English where Chonshu says that Bob will become his as well. That's not in Japanese, just the cafe and the town.

I have no idea what happened with the last line there. It almost feels like a mistranslation, but those are so rare I find it hard to believe. I also don't know who "the Mitster" is supposed to be - SNK went for the "-ster" suffix a few times over the years, but I'm not sure who it's supposed to be here. It feels like it should be Richard, but I can't get from there to Mitster at all.

Kishi said "the Mitster" might be Mitsuyo Maeda, a famous Brazilian martial artist. He would have been very dead by 1995, but it's all we've got.

Ending B is also the same for all characters, so it's on a common page too.

Chonrei's intro is the same for everyone, so it's on a common page.

Okay, this is weird. The Japanese unambiguously says Bob beat the Jins on July 3rd. Problem: every other character in the game beats the Jins on their birthday, and that's not Bob's. In fact, it's Sokaku's! The English version is actually correct here, fixing the date to Bob's given birthday of May 15th. And it's not just a flip with Sokaku either, that guy correctly beats the Jins on his birthday in Japanese. It really does seem to be a rare instance of the English version fixing a mistake in the Japanese.

...of course, then they just completely rewrite the next line. Why? Who knows? A few characters (like Mary and Hon Fu) get that line just completely changed in English and I have no idea why. Incredibly bizarre.

Japanese Bob has the same final line as Mary, Franco, and Hon Fu, where the brothers regain their souls and go home to China. English Bob has something different and completely unique. It actually plays into his ending. Huh.

Like Mary, Bob's English ending cuts off. It's probably for the same reasons, where they put a long English line in without realising the display time is matched to the spoken line. But thanks to All About Fatal Fury 3 which has a close-to-complete English script, we finally have the rest of the line! Bob's Japanese line is a short and sweet typical Japanese shopkeepeer line, while the English line is considerably expanded.

It does sound like a stereotypical shopkeeper line, though, so good job on that localization. And once again "Pao Pao Cafe 2" gets localized into "Pao Pao Cafe West", which I rather like. They've got their own little local chain going.

I also like how many cameos the devs crammed in there. Duck and Kim would come back for the next game, and Tung would make it into Real Bout Special, but this is the last time Axel gets an official appearance. He's passing the torch.