Just like in FF2/Special, all his win quotes are boring. Dammit Andy, story mode made me like you. 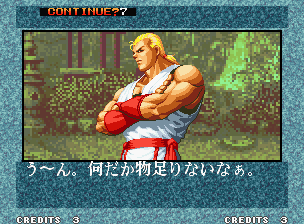 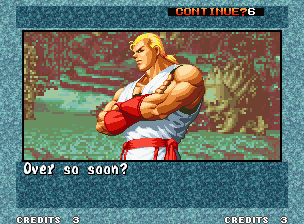 This is different, but it's boring so it's not entirely obvious why it's a problem. I guess there's the same sort of sentiment in English and Japanese, but it's kind of obscure.

And to be fair, all the normal move win quotes are boring. 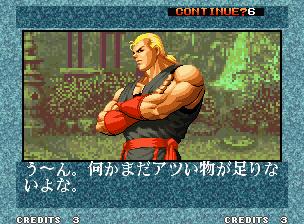 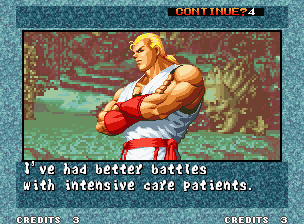 See, Andy's looking for heat and whatever fool just got wrecked in the arcade isn't providing.

The English line again has the same sort of feel as the Japanese line in isolation, if very punched up, but it loses the sense of progression. 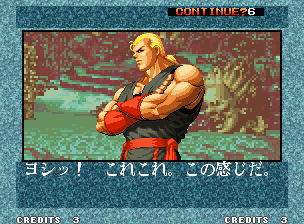 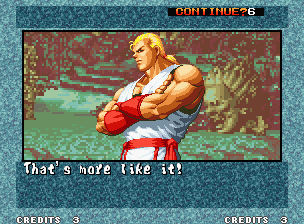 This is just...straight. The English line loses its effect without the previous two lines being written to work with it, though.

It is cute that they did it in Japanese, though. 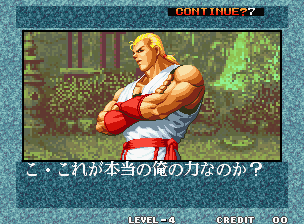 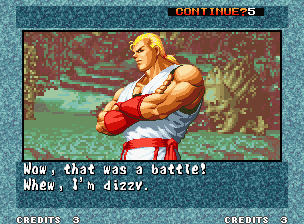 English Andy, like his brother, isn't really surprised at the super move he just pulled out. It's got a very different feel from the Japanese. There's still a bit of Andy being under strain in there, but there's no element of surprise. It's interesting when that got translated out.

And in more on Andy's personal pronouns, he's using ore here, which is a more masculine, tough guy sort of pronoun. It's not unknown to switch up what persona pronoun you use in Japanese (you don't speak in the same way to your boss as your buddy, for example) but it's interesting that it switches up here. What's different about this vs story mode? Or is it just a different draft?