Master vs Expert is two different translations of the same word. That's the difference.

I promise everyone else is more exciting. 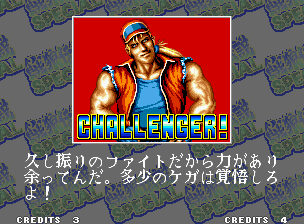 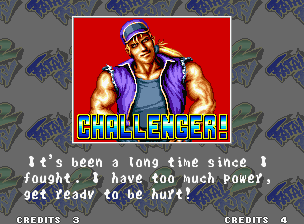 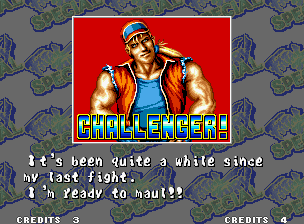 The "it's been awhile" -> "too much high power man" isn't really there in either translation, which is interesting. The more literal translation of FF2 moves the phrase to the second sentence, so it sounds like Terry just always has too much power instead of it being a consequence of not punching someone often enough for his tastes. Special takes it out completely.

Special also punches up the bit about getting hurt. The line is more "be prepared for some/a few injuries", which FF2 translated fairly literally. I specified bruises because that sounded more natural to me, but "get ready for a pounding!" would be pretty good too. 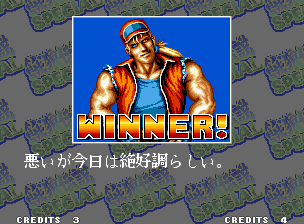 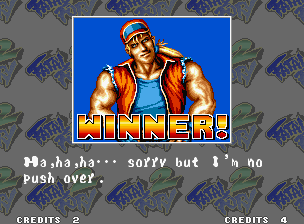 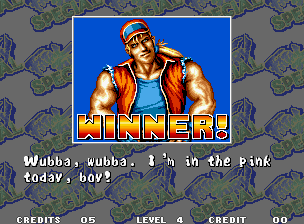 First, some explanation of FFS' translation. "In the pink" is actually a legitimate English phrase that goes back to the 16th century and means "to be in perfect physical condition". Meanwhile, "wubba wubba" was a phrase used by Downtown Julie Brown on MTV in the early 90s. Taken all together, Terry is just saying he's feeling great and likes MTV. It's not that he's been getting repeatedly hit in the head since he was ten. Really. I swear.

The word used in Japanese can mean "everything's going well" or "in perfect condition". Upthorn went with the first, while whoever did FFS went with the second. So that's just a translation difference. It is odd that FFS took out the apology, but I suppose that goes along with toughening up everyone's dialog.

Meanwhile, it's the FF2 translation I can't figure out. The laugh is there in Japanese too, it's a minor difference between FF2 and FFS. But how did they get "I'm no pushover" from "I'm in perfect form/everything's going well"? I can sort of see it if I squint, but I'm not used to having to do that for FF2.

Still, you can clearly see the difference. Grabbing a native speaker to do/help with Special adds in English idioms and pop cultural references that you just don't see in say, FF1 or 2. Terry, being the character they clearly put the most effort into, frequently has his lines punched into another dimension, but an effort was absolutely being made.

Just, you know, one that made him sound completely insane.

Finally, the Genesis version retranslates the line to...basically my version? What the hell. 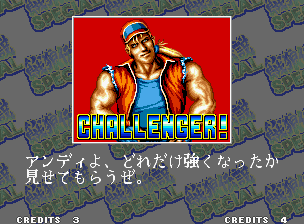 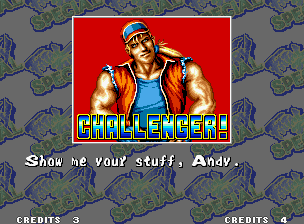 "Show me how strong you've become" is a really anime thing to say, so changing it to just "show me your stuff" was a good choice. 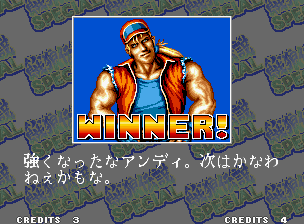 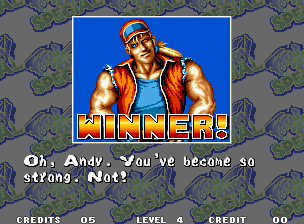 AND THEN THERE'S THIS.

So we have another clear American pop culture reference. The "...not!" formation shows up a lot in SNK games across the lifespan of the Neo Geo - off the top of my head I know it's in a couple places here, Art of Fighting 2, and all the way up to SNK vs Capcom: Chaos. (which gives it a life beyond what it had in actual American pop culture, thank god)

This particular line is interesting because it wants to sound good, but the intent is completely changed. I'm not sure why they did that, though there's a pretty clear theme of punching Terry way the hell up in Special and 3. Gotta make the main character sound cool, I guess. 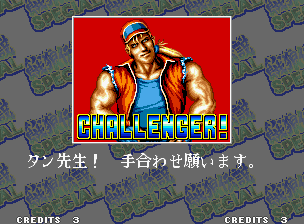 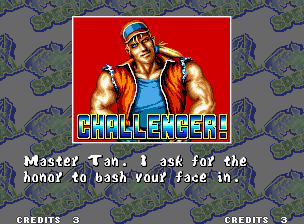 Couple things here. First off, Tan is a literal romanization of Tung's name. The fact they went with 'Tan' in the text when 'Tung' is right there in English in the game UI suggests translators working without context, as usual. The odd thing is that according to KK the SNK community manager, translations were all done in-house in Japan. You'd think that under those circumstances the translators would have as much context as they needed, but maybe it was someone from a different team, or there was a communications mix-up. "Master Tan" is persistent, though, lasting at least until Real Bout Special.

Second, the Japanese line is in a polite and respectful tone. It's the standard polite form you learn in class so you don't offend anyone, which is a pretty big jump in formality from Terry's usual fighting punk speaking style. It's a good way to show off that Tung is someone Terry really respects.

So all that said, I'm not sure what the English line was going for. Just trying to make Terry sound tougher and coming off as weird, I guess.

This line is shared with Andy.

The SNES version fixes the mispelling of Tung's name and tones the violence down a bit, presumably because of Nintendo of America's content guidelines. What's weird is that not only is this after FF1 got away with repeatedly talking about death and killing, it's after Mortal Kombat 2. Monolith Soft wasn't as brave as Takara, I guess. 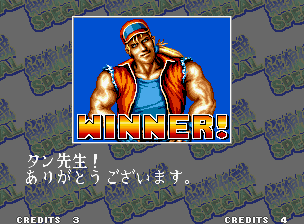 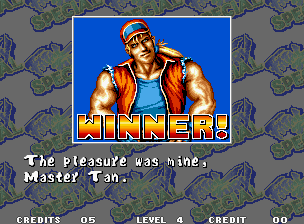 See above for notes on politeness and romanization.

And without those notes there's not much to say here. The official version is perfectly fine, and looks like it was edited to sound more natural. Terry seems to have a lot of very localized lines, which goes along with writing the game for him and polishing up lines the player would be most likely to see. Except then they went way too far.

This line is also shared with Andy.

SNES version fixes the mispelling, same as the previous line. 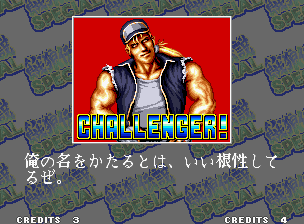 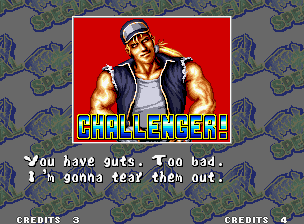 And here we have another punch-up, much like the normal intro. This is a bit more extreme, though. English Terry is pretty consistently more violent than Japanese Terry in Fatal Fury, which makes me wonder about the "You had guts, kid. Now clean them up off the pavement!" quote from KoF96. (It doesn't seem to be a direct translation at all so I'm gonna have to use the process of elimination when I get to 96)

I wouldn't say this keeps the same concept so much as it takes one word and builds up another line around it. Which...isn't the weirdest thing in this translation, so you know.

The SNES version tones down the violence, which is a common theme. Monolith Soft was really scared of Nintendo. 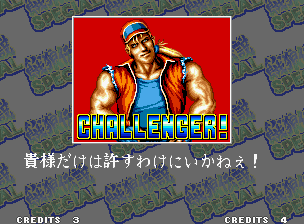 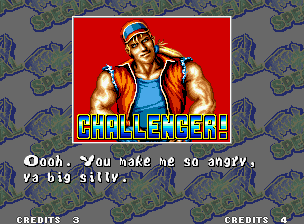 In a strange reversal, stuff with Geese seems to be punched down, completely opposite to how everything else is punched up. It's a near-perfect inverse in tone.

It's a pretty typical line in Japanese, about what you'd expect Terry or Andy to say when fighting Geese, turned just plain weird in English. I dunno about you, but I don't think I would call my worst enemy a "big silly". It's not an obvious pop culture reference either. The most anyone's been able to get out of it is a possible play on "you silly goose" but that's about it. The "ya" is interesting, because it's not used that often and it doesn't make that much sense. It's not an obvious character quirk or anything, just...there.

Maybe it is a pop culture reference I'm not getting.

Andy shares this line as well.

The SNES version actually touches up the Neo Geo version in an attempt to have the line make sense, but it's still a damn weird thing for Terry to say to Geese. 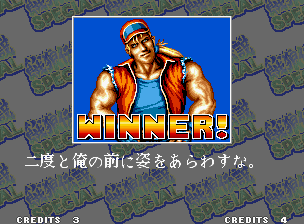 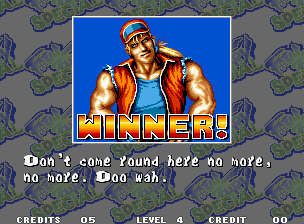 Okay, this is less "punched down" so much as "punched sideways". Or possibly "punched into an alternate dimension".

If we go with the MTV theme, there is Tom Petty's Don't Come Around Here No More, which...doesn't quite match but is the closest thing I can come up with in the right timeframe. "Do wah" sounds generically early rock, but the only direct use I can track down is Manfred Man's Do Wah Diddy Diddy from the '60s.

All that that makes it sound like it was touched by a native, because the entire impression is sort of generic early rock without actually having a proximate cause. Except it's also a goddamn loopy thing to say. Which...never stopped anyone at SNK, so you know.

It does make slightly more sense if you remember the translator was probably working without context. Taken like that, it's still a bizarre punch-sideways, but it's not quite as insane as it sounds as something Terry/Andy are saying to their biggest enemies.

This is shared with Andy. 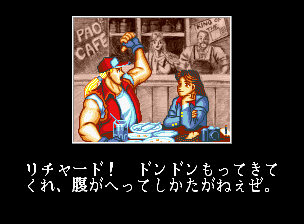 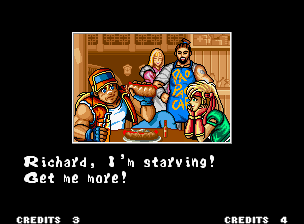 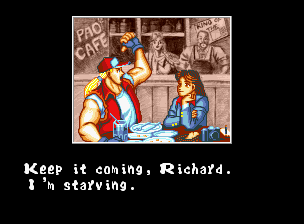 Look, every single difference here is minor differences in phrasing. Let's instead concentrate on how sad and resigned FF2 Terry looks about eating a pile of hot dogs. Or how he apparently thinks a date is bringing a girl to watch him eat, which is possibly why his ultimate destiny is to become a single dad.

Incidentally, that girl in the FF2 picture? Her name is Media Kumail and she's from a Fatal Fury spin-off manga that ran in Gamest (also the source of mecha-Geese). They let her have a cameo in FF2, which makes her Terry's most canon spin-off girlfriend. Suck it, Lily and Sulia. The girl in Special is unnamed, but appears to be a reporter. Wonder why they changed it.

I also want to mention how absolutely charmed I was when I found out SNK had voice acted endings in FF2/S and FF3. Yeah, they're not dubbed, so non-Japanese-speaking arcade goers got Terry babbling at them in a foreign language, but it speaks to a real dedication to presentation that's just all over SNK in the 90s.

It's still weird to hear Terry talk like a normal person, though. 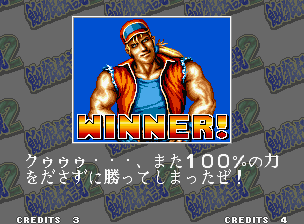 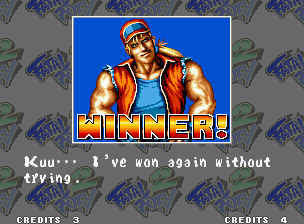 See? Most of FF2's quotes are boring. (then sometimes it launches itself into another dimension and I don't know what to do)

The home versions are generally cleaned up a bit to sound better. Every line I could find was an exact duplicate across both systems, so I combined them for a smaller table. The one that really interests me is the second one, because it's a fairly major rephrasing and sounds quite good. It feels like someone put some effort into the home scripts.

It is kind of funny to have Terry just straight up using Krauser's famous line, though. 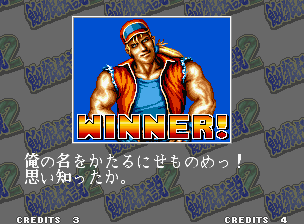 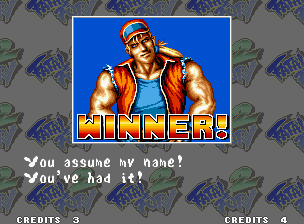 "You've had it!" vs "Got that?" gives a slightly different feel. But not that much. 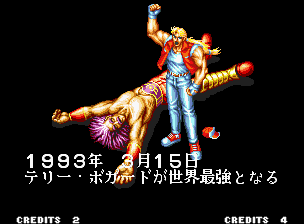 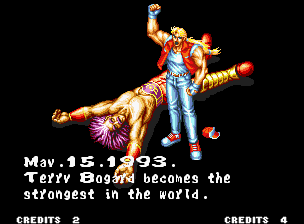 It took me a while to notice this one, but check the dates. Japanese FF2 takes place in March (and ends on Terry's birthday), whereas English FF2 takes place two months later. Why the change? I have no idea. To make things stranger, All About SNK Fighting Games 1991-2000 has the dates X'd out, just like FF1, but without the note about locking the date on the home version. Did FF2 have a similar system where the date was found with the system clock? It's possible, but I don't know for sure.

There's some minor stuff in there about date formatting. I'm not sure why the English version puts periods between everything, because that's not really standard. They do expand it to write out the date, though. That's neat.

The Genesis version ducks the date issue entirely in English and Japanese. The SFC is March 15th, 1993 just like the Neo Geo, which got changed to March 31st, 1994 in English. Fatal Fury 2 did release in the US in April 1994, so it seems to be another nod to the US release date. Both home versions change up the tense, where Genesis goes for past while the SNES goes for present perfect. I'm not sure why they're different.