Sorry Jubei, the series only needs one hitbox-scamming old man.

I am absolutely sure there's a better way to phrase that translation, but that's the super literal version. Jubei is so scary you tell your kids about him to shut them up. Needless to say, both official translators just went off to do their own thing and I can't blame them.

An oni is kind of like a Japanese ogre. They usually have horns, wild hair, and wear tiger skins. If you've played a lot of Japanese games, you may have already seen one! They appear in Shin Megami Tensei, Onimusha, and most things where yokai start showing up.

"Devil" isn't a bad translation for oni, really. It cuts out the extra stuff, but that stuff is really hard to render into English anyway. Meanwhile, Special's version...is less bonkers than Tung's. As usual, it went off on its own and came up with something that at least relates to Jubei's character. 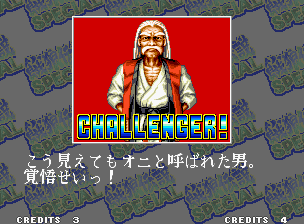 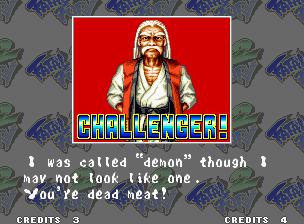 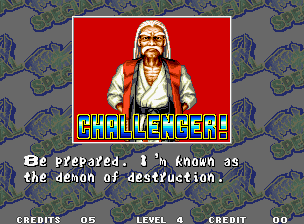 "Demon" isn't a bad translation for oni either. "Ogre" is more common, with "demon" having a bunch more religious connotations, but wrestling expert fbm assured me that it's basically unused to refer to wrestlers. "Demon of destruction" definitely sounds like something you'd call an unusually strong fighter. Neither match the arcade flyer, but I'm pretty sure the flyers were a different translator.

"You're dead meat!" is pretty pumped for FF2. It's interesting to see the bits where they embellished the translation, since it doesn't happen all that often.

Takara and Monolith both changed things up in different ways. "Master of Power" is a choice that doesn't have a lot to do with the Japanese, but does make sense when you consider Jubei's win quote (more below). What's really interesting is that it's also like that on the Genesis, even though we've already seen changes only for the SNES version. Was someone more worried talking about demons in America than goddesses? Was it just done at a different time? Did someone really care about Andy but not about Jubei? "Now I shall destroy you!" is another rephrasing to get stuff past Nintendo(/Sega?) and brings up many of the same questions. "Dead meat" was a bridge too far even for Takara, it appears. All the changes together end with a pretty different line!

Meanwhile Monolith just subbed "man" for "demon" and called it a day. 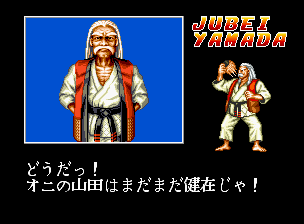 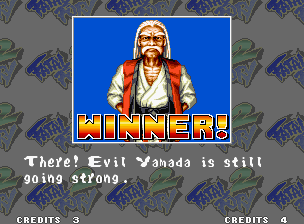 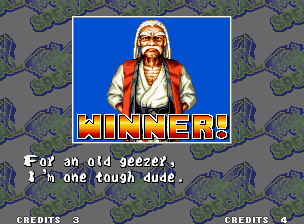 Yamada the oni, oni Yamada...it's the sort of thing you'd translate around if you were doing this for real. Like SNK did! Good for them.

I think they should've kept the same phrasing as in the intro, though. That's the entire point, that he can still live up to his old nickname even though he's a tiny old man now. "Evil Yamada" is close, and weird enough I wonder if whoever was doing it just missed exactly what they were translating. (context again...) "Demon Yamada" certainly doesn't sound any worse. Takara did a better job of keeping the phrasing in the home ports, though it's still a bit off. It's a nice bit of effort, though. From the rest of the game I'd assume they noticed a bit of a theme between the intro/win quote in English instead of going back to the Japanese and ran with it, so good for them.

Meanwhile Special goes off and does its own thing, as usual. Honestly, it's a good translation! It just loses the callback to the intro, which makes me sad. But it gets the basic intent across while sounding pretty natural, which is all you can really ask for. It's not even particularly insane. 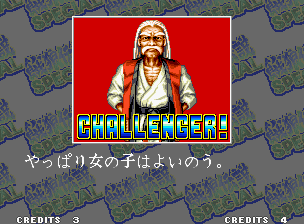 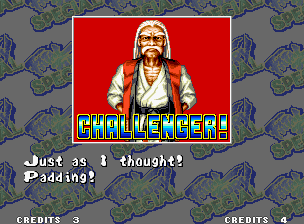 This is probably a good time to mention that Jubei speaks like an old man. I heard the dialect is based on Edo-era speech, which got picked up in kabuki as a way of showing the character was elderly, which filtered down to anime and video games. Treat that as rumours on the internet, but it sounds plausible to me.

Anyway, the Japanese line is pretty boring (grappler likes fighting young women, mm-hm), so it got changed to something a bit more interesting while still implying Jubei's getting handsy.

Have to admit, Special was probably the last time Mai could get away with padding.

Of course the original line wasn't likely to get past Nintendo, but considering where Mai stores her fans...damn, Monolith. Didn't think you had it in you. 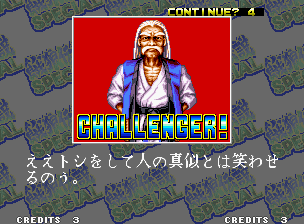 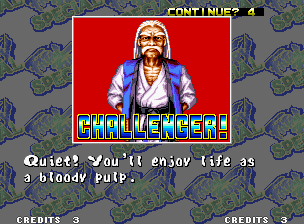 So this is where I desperately try to figure out what the hell the Japanese is and probably fail and only get away with it because how many people are gonna even read this page?

It's something about making (someone) laugh by imitating. It's not a great translation, so if you can do better, feel free to contact me.

Either way it's definitely not the official translation. I have no idea where they got the line. Usually there's a line of reasoning I can suss out eventually, but this really feels like they just made something up. It's to the point where I wonder if the official translator had my problems....

SNES subs beaten for bloody. In general Monolith seemed to be really scared of Nintendo and toned things down as much as they could. Scared of having to resubmit? 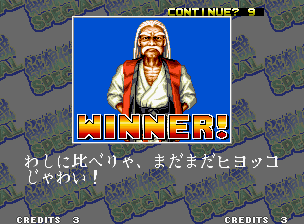 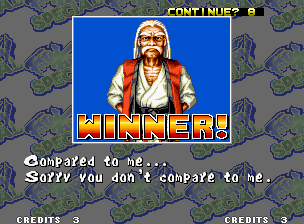 Chick as in baby bird. If this was just for Geese I would absolutely have put "gosling" there, but Krauser had to get in the way. Damn it all.

Anyway the English version drops all the youth/experience comparisons in favor of weapons-grade sass. I approve.

"Compared to me, you're still just the baby school"? ...okay, maybe not. 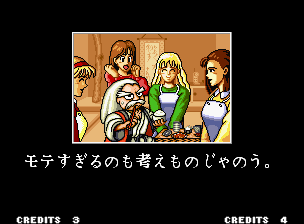 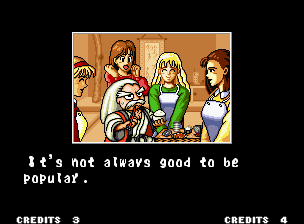 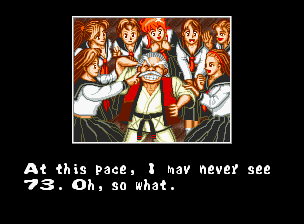 As usual, FF2 is a standard translation. Meanwhile Special takes a cue from the artwork and completely changes the line, which was probably always intended to be kind of joking/sarcastic. I'd say the intent is preserved. The problem with being too popular is that banging groupies means your heart will give out, I guess.

Actually that does kind of change the implication from FF2, but the art already did that, so...yeah, gonna say it all comes out in the wash.

This was completely unchanged in any of the home ports so...make of that what you will. 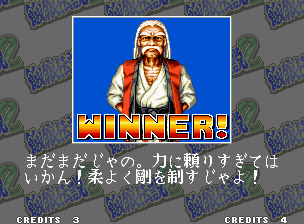 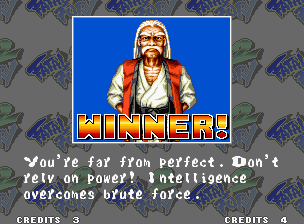 These are pretty straight. I'm a little uncertain about the second one, but mostly in terms of phrasing. The official translation is decent, though "you're far from perfect" feels kind of weird in context. Like, no one said they were perfect...? It's not wrong, the connotation just feels a little off.

Not sure why the laughing got cut in the first one. It's a weird laugh, maybe the translator just wasn't sure how to render it into English? (Meanwhile I didn't even bother trying)

The home ports get the usual general cleaning, though it's the first line that benefits most. The second entirely loses the skill vs power thing Jubei has going on in general, and the third loses what little character it had. Lame! 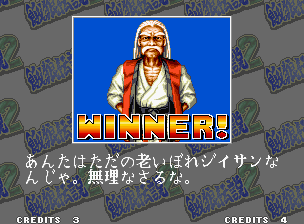 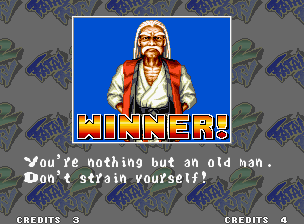 English drops the "feeble" for some reason, but the intent is the same. Harsh, Jubei, harsh.