I consider it a testament to SNK's character design and animation that everyone remembers Geese talking how he does in Japanese instead of how he talks in English.

I'm going with "ruler" for consistency, because it's the same word they use when they're talking about Geese as "the ruler of Southtown". "Conqueror" is a legit translation, though to me it kind of has the connotation of the conquering being more recent...? Maybe that's just me.

Anyway it's straight and that's fine, because it sounds badass either way. 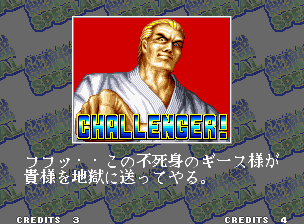 It's interesting that even in the non-canon Special they're already trying to explain how Geese came back. It's the kind of thing no one would've noticed if he'd just popped right back into the cast roster, but SNK went the extra mile to start having Geese just yell that he's immortal whenever the subject comes up.

I also love that's the only in-game explanation you ever get as to how Geese survived FF1. He says he's immortal! Bam! Problem solved!

The part that stands out to me here is how coy English Geese is. We know from Axel that SNK was fine with using "hell" in their games, so there's not much reason to talk around it. It doesn't really sound that bad taken in isolation, it's just a bit odd. Unless the purpose was to open it up to "A very hot place? Tropical vacation here I come!" jokes. 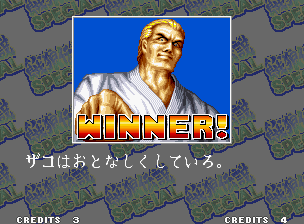 This is my favorite translation in the entire game. It's just plain good. It's what he's saying, it's in-character, and it sounds good. Wins all around.

In lieu of actually having anything to say, I'll point out some Japanese vocab. ザコ/zako, means small fry, and is often used to refer to what American gamers call "trash mobs". Small fry/trash/worthless opponents...all that stuff. "Scum" is a good translation and sounds like something Geese would say.

So it's really weird they completely change the line when it comes up again in FF3.

Scum: too saucy for Nintendo. I'm not even gonna pretend to understand this one. 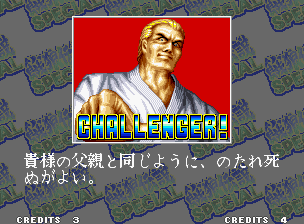 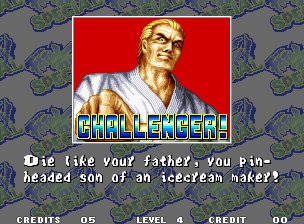 So after that triumph, let's roll into one of the most infamous lines in the game. Truly, SNK localization is a rollercoaster.

The Japanese is pretty straightforward. He's literally telling Terry/Andy to die a dog's death, just like their dad. The English gets that across! ...sort of.

Okay so it got punched into another dimension. "Pinheaded" is a sort of reasonable insult, but "son of an icecream maker" is...not actually an insult at all. Like yeah it's hard to gender-flip "son of a bitch" but it doesn't even make sense as that. I don't even know.

I still love the idea of Jeff the hard-working small business owner, though. And it gives Andy his love of ice cream.

Monolith...okay yeah they did their best. Editing out "son of an icecream maker" is perhaps overly cautious, but "overly cautious" is the catchphrase for the entire game. 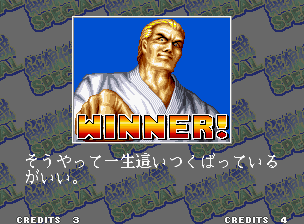 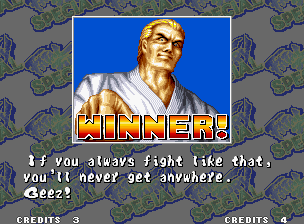 The Japanese is more "grovel", so "spend the rest of your life groveling" is another possible translation. It just didn't sound quite right for any of the characters the line is supposed to be against, so it's not what I went with.

I have no idea where the English came from. Somewhat helpful motivational Geese is a decision to make, I guess. 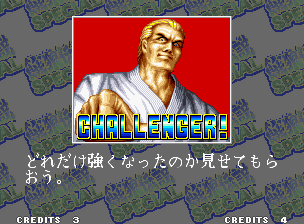 The Japanese is a pretty standard line, and the translator just expanded it a little in English.

The only bit that stands out to me is not contracting the first "you have". I wonder why they did that.

Monolith changes a period to a comma and actually makes the sentence less grammatical for no apparent reason. Sure, okay. 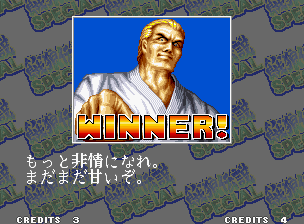 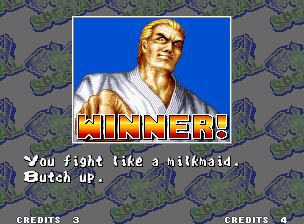 Milkmaid is kind of random, but the intent is there and it's clearly been edited a bit to get...somewhere. Monkey Island reference? I want it to be, but it's probably something the translator pulled out of their hat.

Milkmaids: too saucy for Nintendo. 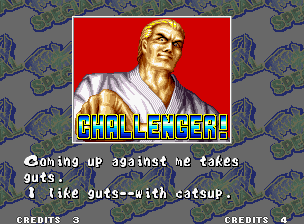 This is kinda weird.

Nerve, guts, basically the same thing. Weird that the official translator grabbed onto one word and just dropped the whole idea of name-stealing entirely. Which is exactly what happened to Terry too, when he used the same Japanese verb...huh. Editing without context? Misreading the verb? Just plain weird?

"Catsup" stands out to me. It was the more common spelling from the 1880s-1970s, but dropped off quickly around 1980 (according to Google Ngrams). Older translator? Regional variant? The '50s phrasebook shows up again?

All that aside, I really love the conceit that there are just people out there who imitate famous fighters. It's just super charming to me.

We all knew in our hearts this line wasn't making it to the SNES intact, and indeed, it did not. The final line ends up changing Geese's character a bit - we all know he hates people coming up against him. 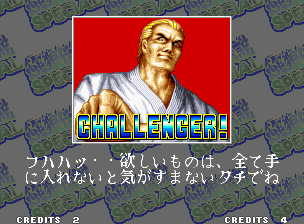 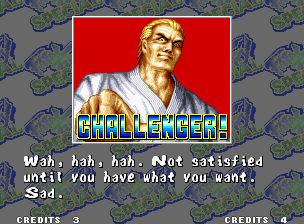 This is a line that just makes you curse. I think Geese is talking about both him and Krauser here, but Upthorn thought he was just talking about himself and the official translator figured he was talking about Krauser. Generally I'd trust Upth, given he actually knows what he's talking about and all that, but it's ambiguous and I think it makes more sense with the characters for it to be both. (if anyone wants to rant about how I'm obviously totally wrong here, as always, you can shoot off an email and I will give it due consideration)

That mess aside, god that's a goofy-ass laugh. Geese isn't really looking down on Krauser for being greedy in Japanese either, that's all the translator. Not like Geese has room to talk there and all... 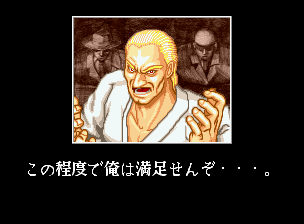 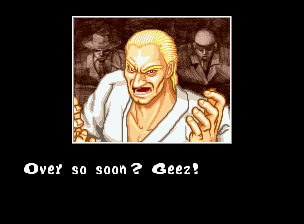 It also sounds like they got their one English-speaking guy to do all the English endings, which makes sense.

As for the actual translation...the intent is there. The character voice went to hell, but we're all used to that by now. I'm kind of interested by how often English Geese throws out "geez", but I need to work my way through the rest of the series before I can say if it's coincidence or not.