Trivia: At ten lines, Andy has the most intros/win quotes of anyone in the cast, counting the ones he has to share with Terry. Terry and Tung are second at nine.

...too bad they're all boring.

Andy shares the Tung and Geese intro/wins with Terry, please find them on his page.

FF2 is painfully straight as usual. FFS jumps the rails in a desperate attempt to make Andy sound cool. ...and succeeds, so you know, points.

I have no idea where the translator got "Baron of Bone-Breaking" from, and I'm guessing the answer would be "their imaginations". Still, it does sound cool. 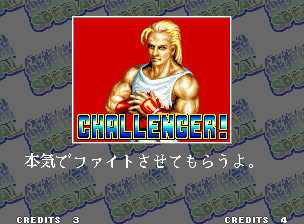 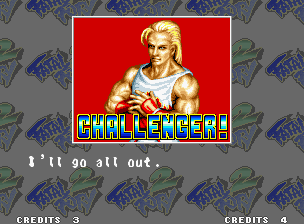 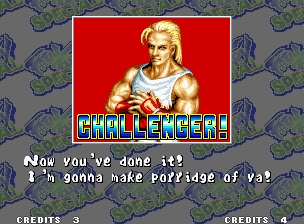 Whoever worked on Special tried, they really did.

"Make porridge of ya" is pretty punched up. You can debate how much Andy would say it, sure, but Special seems to be where whoever did the vs win quotes from AoF1 was allowed to work on the entire game. (I suspect this was an editor, which explains the inconsistencies in amount of work done, but it's hard to tell from here) "Now you've done it" sounds kind of odd to me, since...what is the player supposed to have done? That probably could've been edited a bit more. But it's still decent. 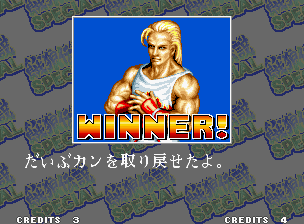 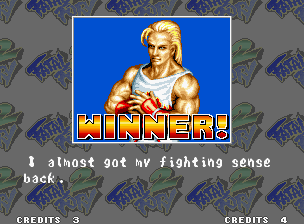 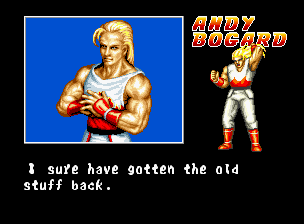 カン/kan in katakana seems to generally mean "sixth sense" or "intuition" in pop culture, which I ended up rendering as "instincts". "Fighting sense" isn't bad either, but "the old stuff" is getting a little weird.

Other than that, this is a pretty straightforward line. The "almost" in FF2 feels a bit off to me, but I'm not really an expert. Using "the old stuff" instead of the more literal "sense" is a pretty good substitution in Special.

The SNES version takes out the "almost" I was confused about and replaces it with "always", which sounds a little better but has some strange implications. Does Andy regularly lose his fighting sense?

SNES Special is entirely the same as the Neo Geo version, and so isn't reproduced here. 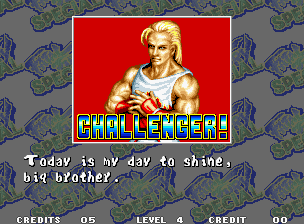 Yeah, he's literally saying "big brother" here, but I tend to translate that as the name unless there's a case where the shift between name and family term is actually important (yes this has come up before). It makes my claims of a literal translation a lie, though! How will I ever recover.

It is kind of interesting that the official translation didn't do that. In a translation marked by a real attempt to sound good in English, the use of a literal "big brother" stands out as weirdly anime. A native speaker was involved in Special, but I'm not sure how much and anyone who ever watched a fansub will tell you that people will happily translate family terms literally, so who knows what happened. I'll be keeping my eyes peeled for what Andy calls Terry in later games.

...besides "hair-spray hooligan", which I assume is a one-off. Sadly. 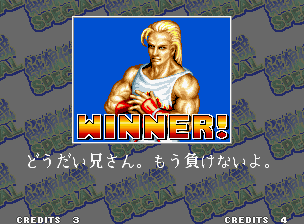 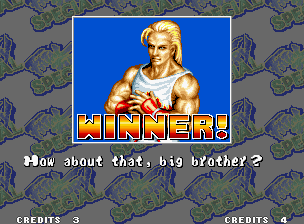 It's kind of interesting they dropped the second sentence when the first one is translated so literally. Other than that, this is pretty plain. There's not even an attempt to add any flair.

Good job remembering the vocative comma, though. I've seen that fucked up so many times...

The SNES version adds a sentence for no particular reason, but it sounds good. It also loses the question mark, which I'm slightly more confused about. Usually the home ports have been cleaned up. 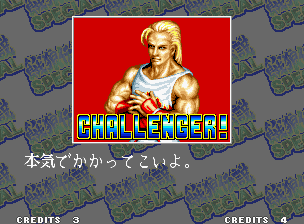 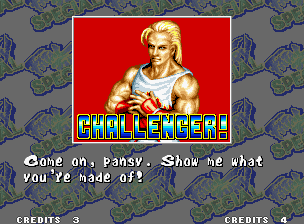 I feel this was translated without context. Just a hunch.

This is one of the few punch-ups Andy gets, which is why it's extra funny showing up on the Mai intro. Andy, this isn't how a boyfriend should act...! (then again, Andy doesn't care about Mai so maybe this is canon)

The original line has a sense of "don't hold back", which the English line sort of retains. To me it sounds like a line against an enemy, not one to telling his girlfriend to go all out with punching his face in. I can see how someone working without context would get from A to B, which turns this into another example of why context is important in translations.

SNES replaces pansy with wimp, which...sure? I'm not entirely sure why that needed to be replaced, but that's what they did. 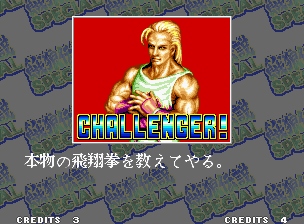 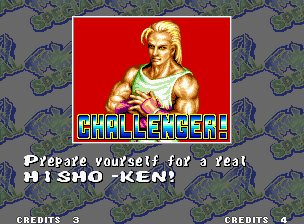 So according to Wikipedia, ALL CAPS to mean shouting went mainstream around the '80s, when computers became slowly more prevalent in society. So there's your trivia for the day.

There's no real indication in the Japanese that Andy is shouting or even getting all that excited, so that's something the translators added. It's not a very exciting punch-up, but it adds a bit of interest.

The Japanese word Andy uses is usually rendered as "teach, inform", so there's a bit of that in the original line. Literally translating that doesn't sound good in English, but I thought I'd make a note. 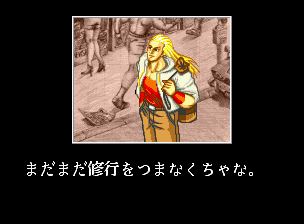 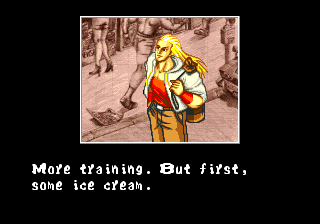 The major difference here is obviously the addition of ice cream. This is probably the translator desperately trying to give Andy a personality, but it's a pretty cute attempt. I approve (so would Jeff).

Like on Terry's page, I'll put the bits not already covered down here. Andy doesn't have a lot of crossover in his FF2 quotes - even his ending is different! 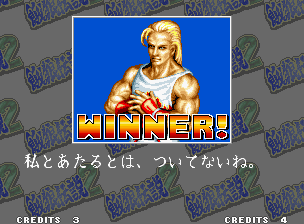 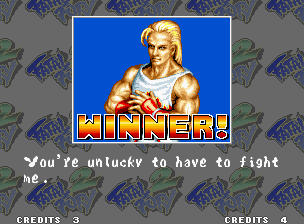 I'm pretty unsure about the first one, which is why it got pictured. If anyone has corrections, contact me.

The interesting one is the last. The official English makes it sound like Andy is somehow dissatisfied with the results, when he's trying to say he's satisfied no matter what. It's not that hard of a mistake to make, which falls in with FF2's "standard but occasionally off" translation.

There is something interesting here in Japanese. In FF1, Andy shares all of Terry's lines, so he ends up using Terry's 俺/ore personal pronoun. (if you're not up on your Japanese pronouns, it's a rough/masculine one) In FF2, he gets his own lines, so he uses 私/watashi instead. (it's more neutral) But then in Special he and Terry share lines again, which apparently caused problems for the developers. Most of the time it seems like they wrote around the issue by avoiding personal pronouns in Andy and Terry's lines, which is pretty possible in Japanese, but there are a couple times where they couldn't get around it. Unfortunately, one of those lines is the one they share against Geese...which uses 俺/ore, because FF games are blatantly written for Terry. Then in FF3 Andy's right back to 私/watashi.

Sucks to be the other Bogard, doesn't it?

All of Andy's win quotes get minor touch ups for the home releases. Unlucky becomes unfortunate, results becomes result, and the reference to a "goddess of victory" is dropped entirely, presumably due to NOA's content restrictions. FF2 didn't get a lot of editing for that, but I guess actually referencing a goddess was a bridge too far. I never managed to get the line in the Genesis version, but I'd be interested to know if that was a change unique to the SNES version. 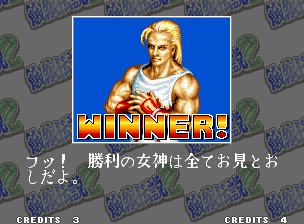 'Cause she saw through the fake, get it.

A "goddess of victory" comes up here and in Michael Max's win quotes, but never again. Weird!

Our "goddess of victory" is also a major difference between the Genesis and SNES versions, where she gets taken out on the SNES but hangs around on the Genesis because Sega didn't give a fuck. Though she's been downgraded from knowing everything to just knowing something. You know, something. Doesn't matter what. 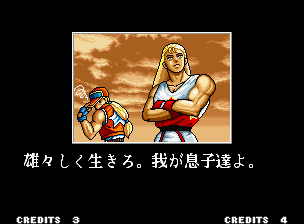 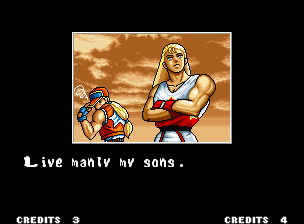 The SNES version is quite a bit less Engrishy. (they probably wanted "manfully" on the Neo Geo)

It's a pretty straight translation either way. The kanji there is a word for "man" doubled, so there's all your implications. Jeff gets his one line in the entire series, which makes Andy vaguely disappointed while Terry fucks off. Such is life.