Hey, this port is pretty good!

Coming out a year later in Japan, this version is a straight improvement over the SNES version and I'd say it's arguably as good as the Neo Geo version. Yeah, it doesn't look or sound as good, but it plays well and has a lot more options for vs play. All characters are playable in vs mode, and they're all more-or-less fully featured, meaning everyone can jump, crouch, and throw. No, this was not guarenteed in the SNES version. And while the Genesis sound chip isn't as good as the Neo Geo's, it gave us a rocking chiptune version of A Kiss for Geese and that's all I really wanted.

Characters don't steal from each other like in the SNES version, instead the Genesis version adds a bunch of win quotes, both for the main characters and a special set for vs mode. 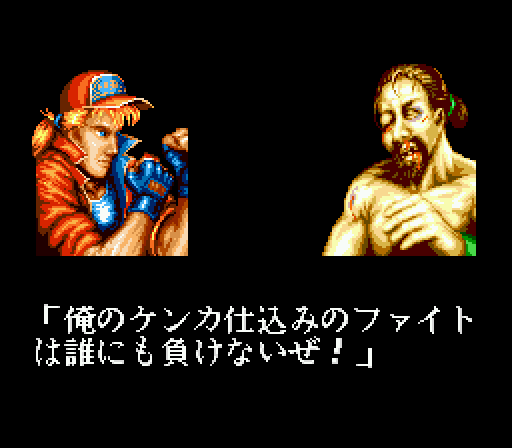 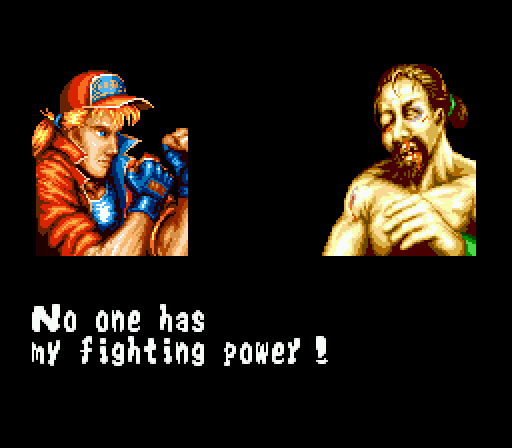 Genesis version adds a win quote. Not sure why, but it's a nice touch!

Ultra-literally he's saying his fighting experience won't lose to anyone, but that sounded really weird. The official translation gets the idea across, but "fighting power" is kind of a strange way to phrase it.

Quotes that are in the Neo Geo version have the same light editing as the SNES version. The home ports are definitely related, it's just hard to tell which was first. (I suspect Genesis)

Also notice how they redrew Terry's portrait for the Genesis version. He's now younger and handsomer. 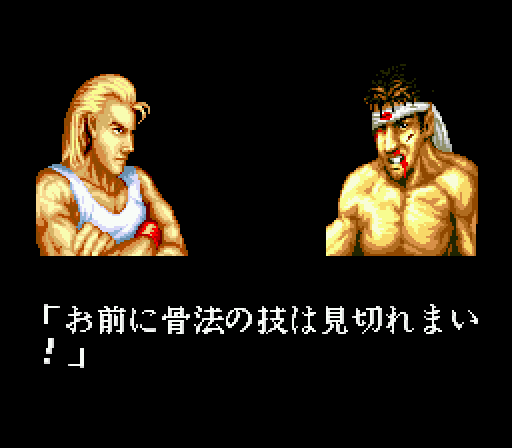 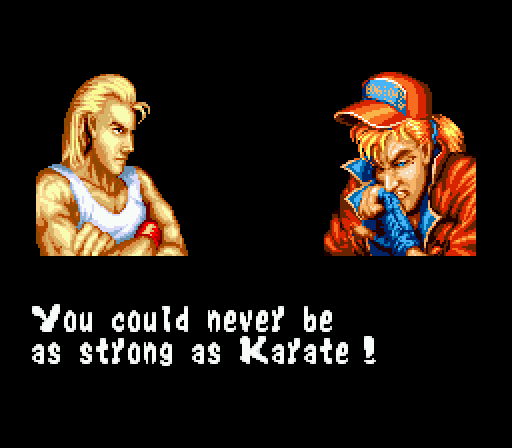 Andy still does not use karate.

For whatever reason, Andy gets two new lines in the Genesis version, while Terry and Joe only get one. Not sure why, but they're both talking up his style, and both got changed to karate to match the Neo Geo translation of his first line. But both are fairly straight translations without much to say. I'm a little unsure about the last one, but mostly how to phrase it.

Andy's remaining two lines don't change much. The all-caps is dropped in the first one, but the other is untouched.

Andy's portrait also got redrawn to make him handsomer, though it's not as big a difference as Terry. 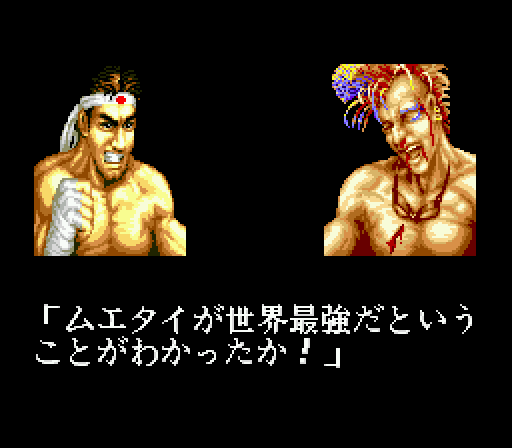 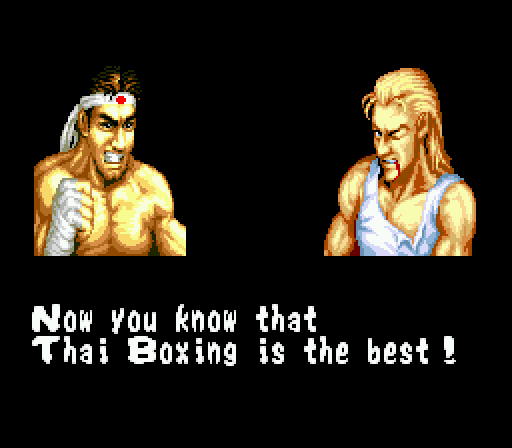 Joe gets one new line to talk up Muay Thai. Or Thai Boxing, whatever. It's a pretty straight translation, dropping "strongest in the world" for a simple "the best".

The second line gets expanded in the same way as the SNES version and that's the only change to Joe's Neo Geo win quotes. 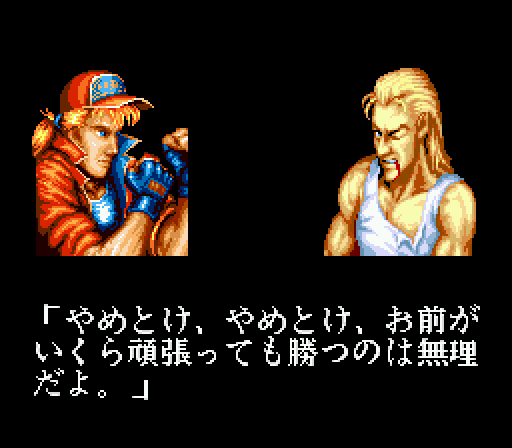 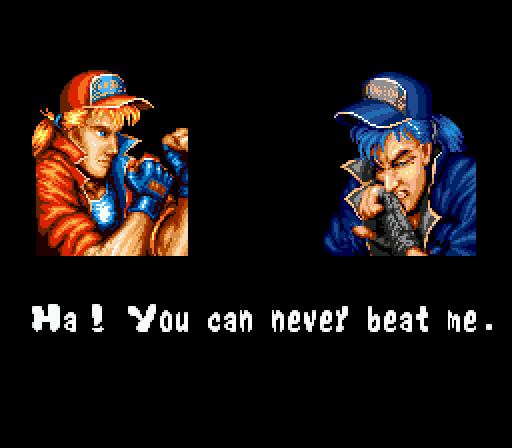 It's the return of the mysterious win quote from the arcade! This time it's a vs-only quote, but I consistently found it in English and Japanese, so I can finally offer a translation!

And it's pretty straight, like all the FF1 translations. The Genesis version changes a bit from the Neo Geo version, adding a "I was..." at the beginning. Interesting.

The only quote wholly unique to the Genesis version is the second one, which got pretty cut down in English, to the point where it has a completely different feel in translation. Also note P2 Terry's weird blue hair. Palette limitations are a trip.

Last one is the same as in the SNES version.

The other PCs attack you at certain points, filling out the gaps left by cutting Hwa Jai and Billy. It's actually kind of cute, it's nice to see evidence that the other PCs are in the tournament. 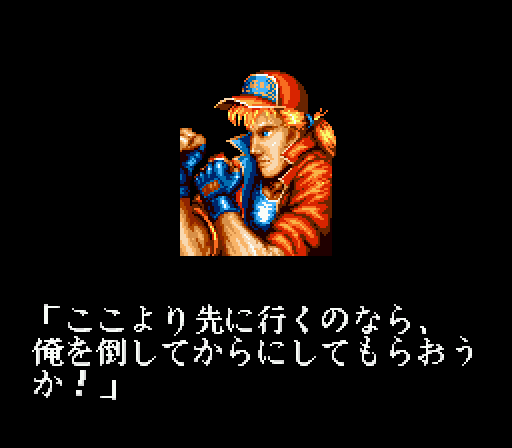 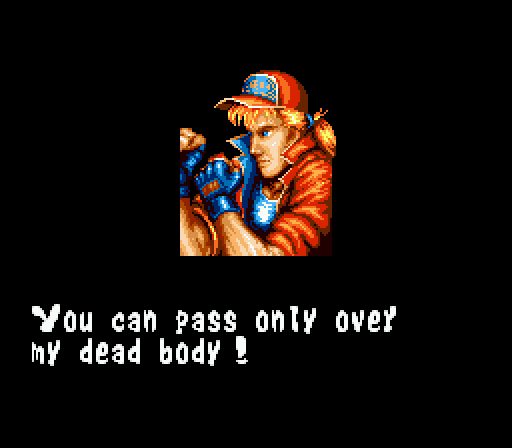 Nice phrasing! It's a bit stilted, but "over my dead body" is a good use of idiom. 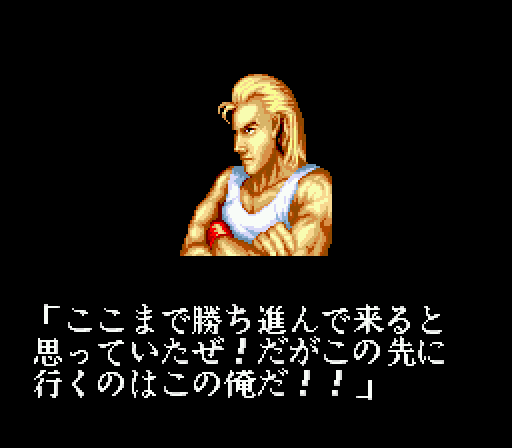 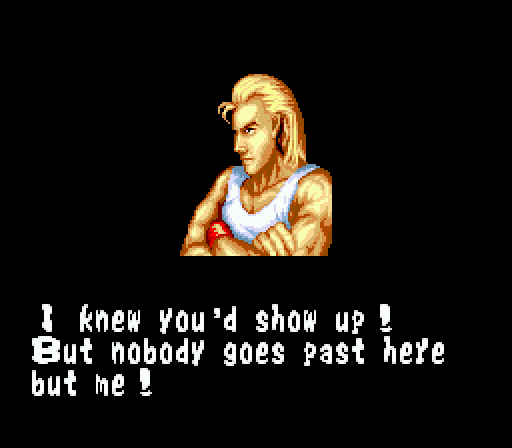 So this is pretty straight, not much to say about the translation. It is interesting that Andy's using "ore" here, which is usually a sign that the line got written for Terry. But this was before they settled on Andy usually using "watashi" for his personal pronoun, so Takara made a guess and no, they couldn't read the future. 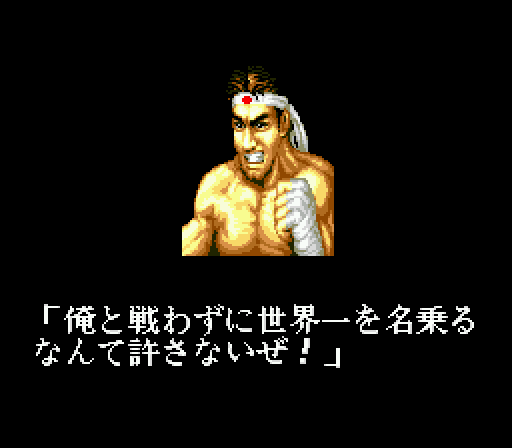 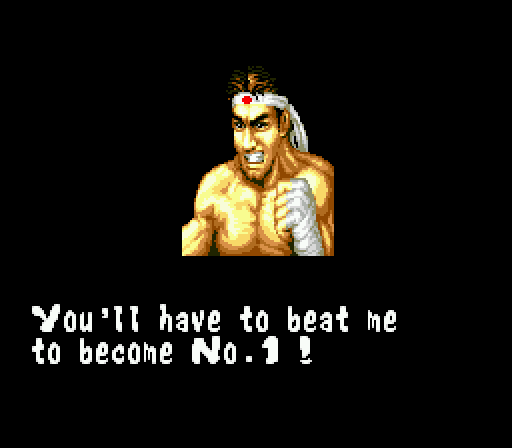 Yeah, this is pretty similar. There's a minor nuance difference between objectively being number one vs Joe letting you call yourself number one, but...sure.

The Genesis keeps the character-specific endings from the SNES version, with a few changes. 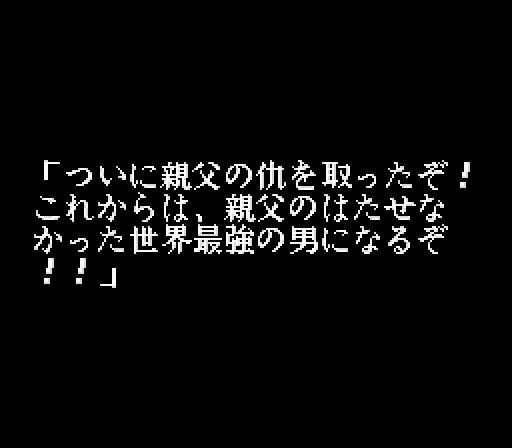 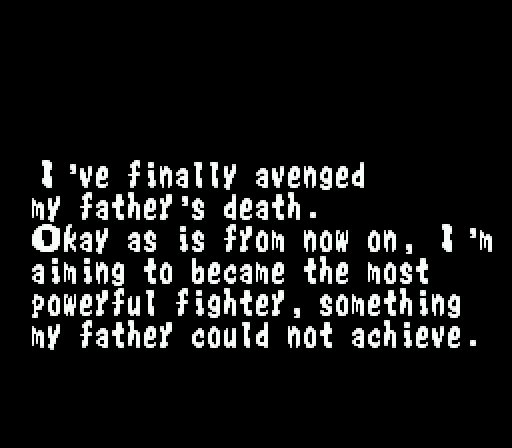 "Okay as is from now on"

So this is interesting. In the Japanese SNES version (which came out first), Terry wants to follow in his father's footsteps, while the English changes it to surpassing Jeff. I was pretty confused about that, until I played the Genesis version (which came out a year later in Japan) where the Japanese matches the English translation. This makes me suspect that the Genesis version got translated first and the SNES English script was adapted from it, not the other way around. Then no one checked if Terry's ending was different in the Japanese because they're very similar.

The Genesis version also has some weird grammar problems the SNES version doesn't have. Of course, taking it as a whole it also has a few bits that are better than the SNES version...they may have been worked on at the same time and slipped out of sync? 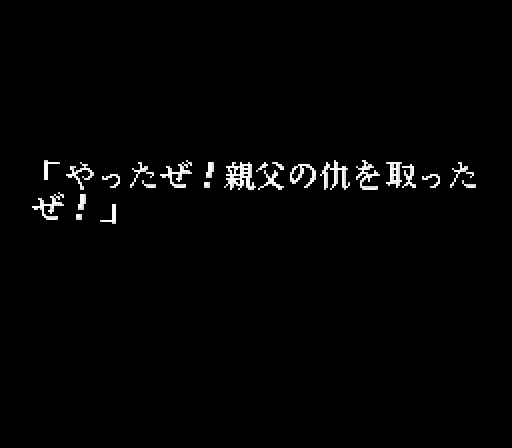 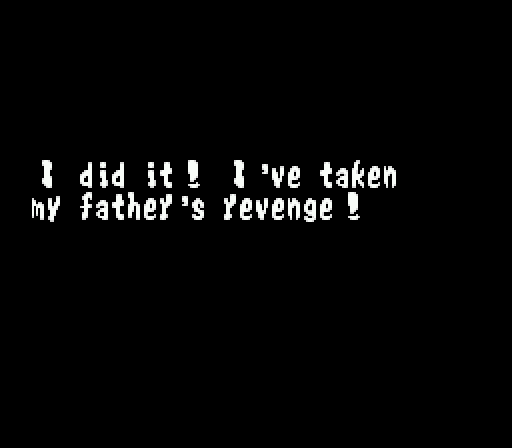 Andy loses his second line and therefore what his plans are now he beat Geese. Anyway, it's exactly the same as the first line in the SNES. 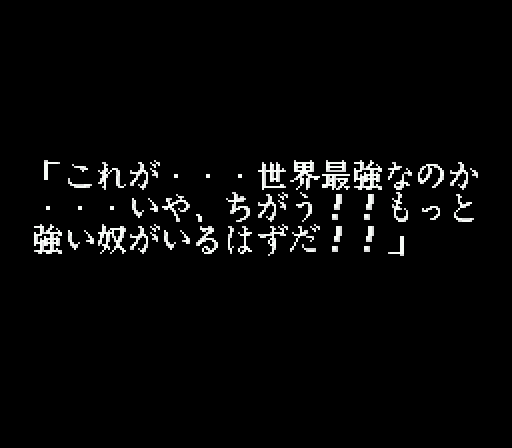 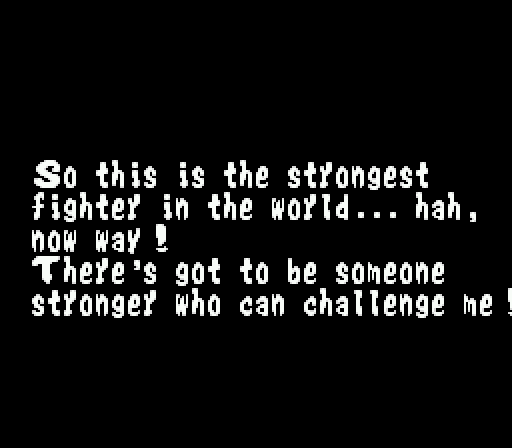 The Japanese version has some rephrasing in the Japanese version, making it more like Joe is talking about Geese at first. This again matches the SNES English, which is more evidence that at least the endings were translated off the Megadrive version without checking the Super Famicom.

Genesis version also has a typo the SNES version fixed, which again feels like Genesis was translated first.